The Roots :: Rising Down :: Def Jam/Okayplayer
as reviewed by Steve 'Flash' Juon 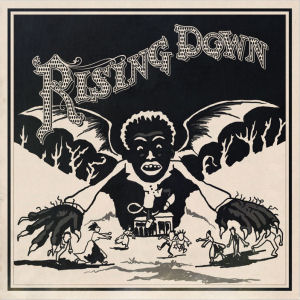 "Yo, between the greenhouse gases, and Earth spinnin off its axis
Got Mother Nature doin backflips
The natural disaster, it's like 80 degrees in Alaska
You in trouble if you not in no Nassaus
It ain't hard to tell if the conditions is drastic
Just, turn on the telly check for the news flashin
How you want it bagged, paper or plastic?
Lost in translation or just lost in traffic?
Yo I don't wanna floss, I done lost my passion
And I ain't tryin to climb, yo I lost my traction
They makin me break, my contents under pressure, do not shake
I'm workin while the boss relaxin"

There's no question Black Thought, ?uestlove and the Legendary Roots Crew are working hard. In the last 15 years this Philadelphia-based group has put out more full-length albums, EP's, compilations and singles than many artists do for their entire career. It's one thing to put out volumes of work though, and entirely another to be critically acclaimed time and again on every CD to hit store shelves. Even on the extremely rare occasions when The Roots put out something slightly mediocre it's still going to exceed the quality of 95% plus of every other rap album you'll hear in the same year. With so much acclaim and a career already worthy of the Hall of Fame you might think The Roots would be happy with their status and success - you'd be wrong though. The opening track of "Rising Down" entitled "The Pow Wow" is excerpts from a conversation where The Roots and label executives are LITERALLY screaming at each other over the phone. It occurs to me now that I may have been overly optimistic when reviewing "Game Theory" about how The Roots career had been revived by leaving Geffen Records to sign up with Def Jam.

Then again if the lyrics shown above from the title track of "Rising Down" are any indication, it may be for the best if The Roots are never truly satisfied. It's not that I particularly enjoy the idea of an intelligent, articulate, lyrical and spiritual man like Black Thought wanting to daily pull out his hair in frustration but by the same token a pissed off Black Thought is truly an unstoppable force of nature. At the heart of every Roots album beats the verbal dexterity of a man who is STILL underrated as an MC by critics and peers after all these years, and that's gotta be vexing too. Sometimes the sheer joy of making music can break through and become an upbeat experience, but there's still a pervasive sense that no matter how good shit gets eventually "Things Fall Apart." It's often been said (and believed) that it's hard for a truly great artist to tap their inner creativity without a driving force of motivation - poverty, war, discrimination, misinformation - take your pick. Black Thought channels all those forces through a worldview shaped by his South Philly roots and pours out his frustration in an unstoppable lyrical torrent, leaving you no choice but to stand in awe of his "75 Bars":

"I arrive on time, I'm never fashionable
You late, I'm already international-able
I done toured to Berlin, banged in Beijing
You never seen nothing,can't say the same thing
Tell somebody Black Thought, yeah you know the name ring
So give him the game ring, for bringin what them niggaz can't bring
My hustle is long, my muscle is strong
My man, put the paper in the duffle I'm gone
Y'all still a light year from the level I'm on
Just a pawn steppin right into the head of the storm
You been warned, I will blow y'all niggaz and disintegrate
I'm a rebel, renegade, must stay paid"

"Rising Down" does not lack for guest stars to help Thought rock the mic, covering a wide gamut of styles and sounds. Shit gets lyrically deep when you pair up Thought, Malik B and Talib Kweli on "Lost Desire." The Roots smooth it out while simultaneously getting a little more gangster when Saigon and Truck North jump on to get "Criminal." The best of both of those worlds meet on the title track when Mos Def and Styles P spit bars, while Common and Dice Raw do their best to steal "The Show" when they get a piece of the action. None of them can outshine Black Thought though, truly a man on a mission on this album as a whole and on the latter song in particular:

"Uhh, and I'm still the one
Am I a poet or a prophet or a stone to build upon?
And what's the reason I still perform?
Feed my children or, how I'm on the hustle from dusk to dawn
Where all the love and the trust has gone?
Eyes wider than a baby that just was born
Fightin the war they ain't pay me enough to join
Behind the phrase they was crazy enough to coin"

You would expect the production on a Roots album to be excellent and "Rising Down" is no exception. Some albums are well mastered, some are well produced, a lucky few are both but a Roots album is CLEAN - so clean you could drop it on the floor and still eat off of it. There's never an Ahmir '?uestlove' Thompson track that makes you say "Yo they should have spent a little longer in the lab finishing that." Never happens, never WILL happen. In a world of people who aren't serious about their craft, The Roots are damn near anal, and I mean that entirely as a compliment.

On the album's finale (save for the bonus track) The Roots still have reason for hope, as Chrisette Michele gets down with Thought and things start bubbling and "Rising Up" in a positive direction. The funny thing is that when The Roots drop a new album, no matter how frustrated and pissed off they are at their label, things are ALWAYS rising up for hip-hop fans. Do the one thing you can do to make Thought a little less frustrated - buy their CD's, go to the live shows (reputed to be the best in all of hip-hop) and cop some merchandise from Okayplayer. I hope The Roots can always find a happy medium between frustration and creative inspiration without getting burned out, because every time a new Roots album comes out it's a happy day for the rest of the world. Stop wasting time and go to the store to get "Rising Down" right now.