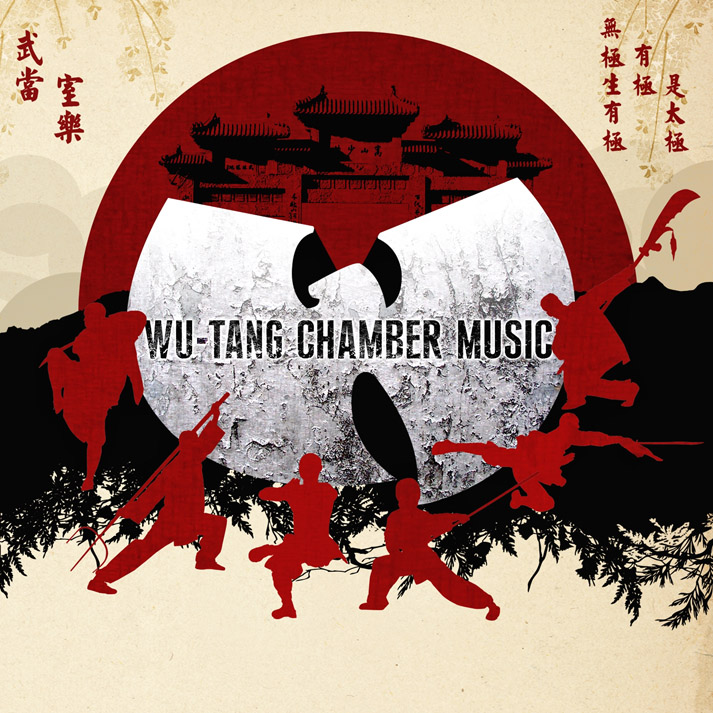 "Still I be +Hard to Kill+ like Seagal
Warrior built, big shield and long sword
One Six Ooh'ing it, doing it, king size
Salutations, that's respecting the king eyes
For those that follow my lead
Attract to the light - at the same time, marvelous speed
I'm so dope, I can bottle it free
The most influential, modern day martyr is he"

A hot fire verse from Inspectah Deck to open "Chamber Music" may be all the evidence for a patient Wu-Tang Clan fan that this is the long-awaited followup to 2007's "8 Diagrams." The last album was not without controversy though as some Wu fans embraced the shift to a darker production sound RZA followed, while many others objected to abandoning the "classic Wu sound" including some members of the Clan themselves. For those who have been engaged in an 18 month long debate ever since then, "Chamber Music" will not be able to settle the issue.

First and foremost, this is NOT a Wu-Tang Clan album. It's more convenient for everyone involved to label, package, release and treat "Chamber Music" like it is a sequel to "8 Diagrams" and it's even possible history will consider it such. Under close scrutiny though "Chamber Music" reveals itself to be a compilation album with members OF Wu-Tang doing duets with fellow New York patriots. Furthermore the run time for album is just under 36 minutes, which is incredibly short for a Wu-Tang release, and much of that 36 has been padded out by spoken word interludes between songs from RZA. In fact out of 17 tracks total less than half are full length joints whether you consider them Clan material or not. It's not hard to feel the Wu vibe seep through the cracks and pour out all over this CD though, particularly on tracks like "I Wish You Were Here" featuring Ghostface Killah & Tre Williams.

"What up boo, you know that Ghost loves you
I get butterflies when we hug and kiss, do you?
Huh? Answer me, let me if it's the truth now
That pretty mole above your lips looking cute now
Ooh child, I'm patient, my mind's telling me
To stay calm, I wanna get it off like a G bomb
On top of your skin, I'm sliding it in
When I'm done, you can wake it up and ride it again
Then we can hold on through the night, fan on and covers on
It's bright from the TV light, peace, good night"

Ghost's rap is nearly a throwback to "I Can't Go to Sleep" - emotional and heartfelt, voice cracking, a performance only enhanced by the wailing vocals of Williams - all thrown over a slow and softly played backdrop by Bob Perry and Fizzy Womack (Lil' Fame). Speaking of production, that's another reason this can't necessarily be called a Wu-Tang Clan album. Even though RZA is all over this album vocally, the only track where he even SHARES a production credit with Fame and Andrew Kelley is "NYC Crack," which coincidentally or not may be the most throwback to the early 1990's Wu-Tang Clan sound - even featuring a voice in the background whispering "watch ya step kid" in a nod to "Protect Ya Neck." RZA also provides the sole rap performance on the song:

"And when it comes down to that basic talent
I got 20 little cousins that can meet your challenge
Yo, stop and listen, and check this proposition
Son, got lots of vision, plus lots of wisdom
Hindsight, foresight, insight, out of sight
Some try to imitate, but they are not alike
They only piggy back, have a Digi Snack
That Wu-Tang slang is that New York City crack"

It's hard to miss that the minority of full length songs on "Chamber Music" feature other non Wu-Tang fans, but considering the guest vocals are from the likes of AZ, Havoc and M.O.P. most die-hard Clan fans are not likely to complain. In fact whether or not you consider this an actual Wu-Tang Clan album there's not much to hate about "Chamber Music" other than the fact it's a small dose of the dopeness instead of the full out Wu-Tang hit that fans undoubtedly wanted. Hopefully that will come later this year.