Debaser :: Back to Work :: Sandpeople Music
as reviewed by Steve 'Flash' Juon 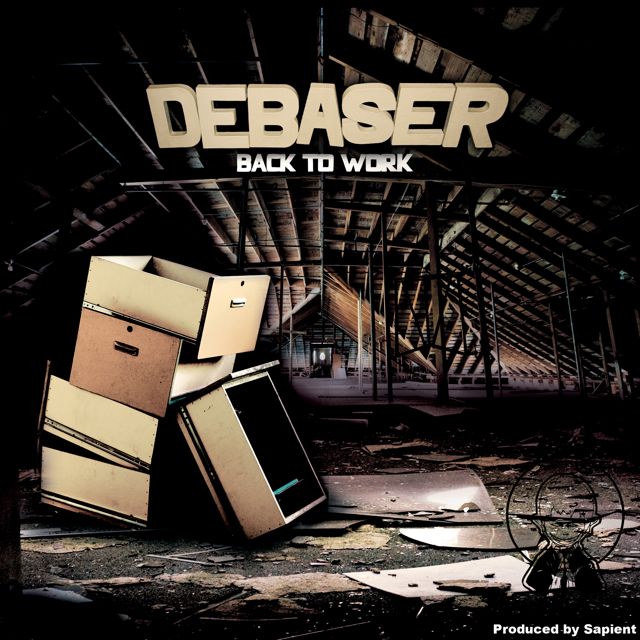 Three years ago Debaser wriggled their way up through the sands of the underground to the surface, surprising both the critics covering hip-hop and the rap fans who listened to it with the quality of their music. Sapient's production embraced both familiar hip-hop forms and instrumentation outside the norm, while Ethic's rap had the style and confidence of a well experienced hip-hop artist as opposed to a relative newcomer. Being part of Oregon's Sandpeople crew clearly sharpened the skills of both men long before the first Debaser album hit stores, but a stunned Jordan Selbo was still forced to proclaim their debut represented "a group transcending the current standards of the genre, concerned not so much with bringing it back as with moving it along." Thus the stage was set for Ethic and Sapient to be a modern day Guru and Premier, much beloved and often underrated, an outstanding team that musically and lyrically complimented each other perfectly.

Three years and a half-dozen or so Sandpeople projects later, the dynamic Debaser duo has returned with a vow to get "Back to Work." They waste no time whatsoever on "The Crown Fits," a sly reference to their previous body of work that doesn't make the mistake of living solely in their past glory. The tempo is ideal for Ethic to flow over, the snares are extra crispy, the keys of the melody meld expertly with a bassline that swings up and down pleasantly, and the lyrically confident rap still packs a powerful punch:

"Yeah we back to work, hot off the internet
Ain't a thang changed, we just a bigger threat
Still them dudes that tell you you isn't fresh
She your girl? I fucks with her, she can buy us cigarettes
(Whattup?) Yeah we out to murk fools
Keep talkin loud, but we still work you
We work, you know nuttin about this
And we don't give a fuck, cause guess what? The crown fits"

Debaser's entire "Back to Work" album clocks in at just UNDER 30 minutes. It's almost too little to listen to after a three year hiatus, but one quickly realizes that this crew never presents anything to excess. In fact their two longest songs "Bow" and "Someday" both clock in at 3:40, and they're both worth taking note of. The former is what would happen if rap was taken back to madrigal times, a plucky string sound with handclap instrumentation and commands to prostrate yourself before rap royalty:

"I show callousness for those talentless
We hold it down in this, y'all sittin down to piss
I'm steppin on you cause you're a pile of shit
Now I gotta scrape off my shoe...
You think you see me on any level then your brain is confused, bitch
I talk about you like you ain't in the room, bitch
I paid enough dues to eat off this hip-hop
So I'll never get caught wastin my food, bitch!
And you could never decode this
I'll put you in a deep cold where things don't live
I'll demote your inner hero into a chemo' kid
Sayin things normal peeps don't get"

The latter is the album's closer, featuring the strongest and loudest ivories of any track on "Back to Work," and features a chorus that first offers its sentiments quietly to draw you in, then repeats it more loudly for emphasis and understanding:

"I caught a glimpse of the beauty in the intricate plot
I wasn't born to be a brick in the wall
I don't think normal is what normal is and it's pissin me off
But see, I've lifted the laws of physics and thought"

With the naturally inherent dopeness of Debaser, guest appearances really aren't required, but both Phat Kat and Rasco make welcome cameos on the stomping "Out Front" as does Illmaculate on the whistling melody of "End Life." The attitude of Debaser towards their brand of hip-hop may be best described by Luckyiam on "Rap Scene." The song is sprinkled with sounds that remind one fondly of 1980's era clave beats and electronic notes, while Lucky notes that so many of their peers simply haven't evolved in all that time:

"I be embarrassed when tellin 'em that I rap see
everybody and they momma cousin's in the rap scene
It's like they acting, but most of 'em is waiters
None of them can serve me, and half of 'em is HATERS!
I'm a major indie player public speaker teacher featured
Like to travel, got a lot of ways to reach you
Cause after I get bottled in the class with stupid phrases
when the verses they should swallow are the ones they end up keepin
(Say what?)"

It seems strange to complain that an album is too short or has too much keyboard music, but if one is looking for the tiniest things to nitpick about "Back to Work," these are the only choices available. They haven't gotten any less enjoyable since Mr. Selbo first introduced them on RapReviews three years ago, but in a market saturated with poorly constructed rhymes and banal beats delivering tired concepts, they are needed to refresh hip-hop now more than ever. A half hour just isn't enough, and a little more musical diversity wouldn't hurt. Debaser is the kind of group who could parody a club song and still make you want to dance to it, who could parody New Boyz and still make you want to jerk to it, who could take any genre of rap and make it seem like their own. Their talent is limited only by their commitment to record as a group full time.