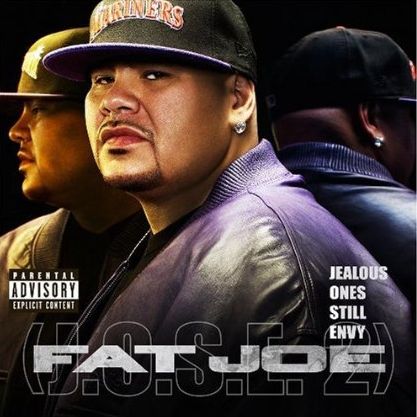 The two greatest enemies to career success in hip-hop are jealousy and time. Fat Joe has been rapping about the former for over 15 years now, and he's still here big balling and eating good - possibly better than he ever has in his career. In any field of endeavor, it only takes one envious person turning from jealousy to hatred to cause tragedy, but hip-hop artists have seen more than their fair share. It may be that intimate knowledge of what haters are thinking that has given Joe a survivor's edge - the more he's rapped about it, the more he avoids the urban traps set by everyone who prays for his downfall. Give credit where it's due - Joe is a crafty, entrepreneurial and resourceful dude.

Eight years ago when Fat Joe released "Jealous Ones Still Envy," a sequel to 1995's "Jealous One's Envy," Joe was in the unenviable position of carrying his entire label on his back. As RR contributor Mr. S noted at the time Big Pun was dead, Cuban Link and Triple Seis had left, and there was nobody left on the roster with any star power OTHER than Joe. As a soloist Fat Joe had been hit and miss up to that point, though he had started hitting his stride around "Don Cartagena" in 1998 - ironically in part BECAUSE he had the aforementioned rappers to help push him to be a better artist and vice versa. You know the old saying - steel sharpens steel. Fortunately for Joe, even without his comrades, that steel was still sharp in 2001 - perhaps inspired in part by the memory of Big Pun. Remarkably it stayed sharp for many years to come. Even on 2005's "All or Nothing" Joe was still one of the hardest hitting rappers in New York, showing an adept ability to craft cinematic gangster tales and match them with top notch beats.

We did mention that the two greatest enemies of a rapper's are jealousy and time in the opening paragraph though. The mere act of surviving time for so long breeds an enemy less deadly than jealous but more insidious - complacency. As long as you keep selling on each record you put out, why worry? When your records stop selling and you wake up to the fact you lost touch, it's too late. Your audience has already moved on. Even though you're not dead, your career is. That's the point you have to go on the nostalgia circuit, peddling your past success to an aging audience of fans mixed with a group of hipsters who think stuff older than they are must be cool. If you're lucky you get a career boost from a VH1 documentary, or one of today's hot rappers has you cameo on a song, but opportunities to cash in come fewer and farther between. Far too often nobody around a rapper in their camp has the sense to warn them they're falling off - they're too busy enjoying the gravy train to think it will stop either. You can't let time pass you by.

Fat Joe has been resilient and even to a degree has adapted with changing times over the years, but recent releases like "Me, Myself & I" and "The Elephant in the Room" suggest that time has been eroding his survival instincts, and complacency has caused entropy to increase at an exponential rate. Joey Crack still manages to have one or two hits each album, but the lyrics are losing their luster and the beats now miss as often as they hit. If ever Joe needed a wake-up call he wasn't going to get from his homies, the lackluster reviews the last two albums got should have been it in spades. Oddly enough the result on "J.O.S.E. 2" may be the most schizophrenic album of Joe's career. On one hand the album's title suggests he's trying to find his way back to previous methods that worked for him, and recapture the artistic relevance he once had. Some tracks achieve that glory. Although it might be predictable to find a Wu-Tang member on a track called "Ice Cream," Raekwon's rap works and guest T.A. spits a nice verse too, but the smooth beat by The Inkredibles is as much the star as any of them. At the opposite end of the spectrum is the Ron Browz produced "Winding on Me," which does have one remarkable feature - Browz seems to be singing off temp on a track HE produced. Joe has some remarkably silly lyrics about bottling and selling his swag, but none are anywhere near as bad as "Put Ya in Da Game":

"Suicide do's, I'm so Cobain
Louis camou' jacket, the bag is the same
She says Joey Crack you must be sellin cocaine
Cause they don't make no money like that in the rap game
Mr. Mr. Rainman, yeah I can make it rain
Top blown off, and I ain't even aim
Yankee hat back, the seats on lean
And no that's not a car, that's a fuckin' airplane"

Aside from the fact making "aim" and "lean" rhyme is a real stretch (which he somehow manages to pull off anyway) I'm really hoping that calling suicide doors on a car "Cobain" doesn't catch on - that's needlessly tasteless even by rap standards. Having Jim Jonsin produce the track and T-Pain croon Auto-Tune on the hook suggests that Fat Joe is almost desperate to be hip, and the song almost overcomes how cornball it is as a result. Almost. The album swings wildly between these extremes. The simply titled "Music" produced by Raw Uncut is a remarkable track, with Joe confidently making fun of haters with the kind of swagger you don't HAVE to name, reminiscing about how he traded in the crack game for the rap game while putting all his friends on in the music industry. I approve. "Aloha" is the exact opposite - Rico Love goes for broke trying to imitate Drumma Boy and The Runners all at once on the beat while Joe gives perhaps the worst rap of his long career:

"Touched a couple plots, got the dough and skate off
And just like Bernie, me and my baby Madoff - hello!"

Goodbye. There are some songs which find a comfortable if slightly awkward middle in all this insanity, such as the over-the-top raunchiness of "Porn Star" featuring Lil' Kim and "Blackout" with Rob Cash and Swizz Beatz. When Swizz Beatz has one of the better RAPS on your album, let alone one produces one of the best tracks, you might be in trouble. The perplexing thing about "J.O.S.E. 2" is that Joe somehow manages to live in the past yet try with all his might to be the cool hip Auto-Tune 2009 dude, and in reality he can't be either one of those things. I suppose Joe can't be blamed for trying to stay trendy so he doesn't become irrelevant, but in working hard to combat his complacency he's gone the opposite direction and become the one thing time no rapper should ever be - the old dude in the room everybody's snickering at because he thinks he's being cool when he's not. I'd rather have Fat Joe on the nostalgia tour sponsored by VH1 than the Auto-Tune Joe.