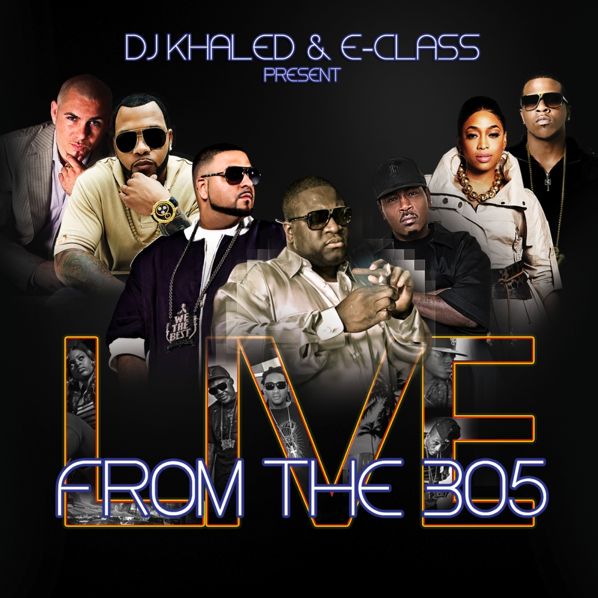 DJ Khaled has never really been the "producer" kind of DJ, and he has never been the "turntablist" kind of DJ either, so DJ Khaled's albums don't feature original beats or his superior skills on the 1's and 2's. Instead DJ Khaled uses connections made over the years as a Dade County radio personality to put his favorite artists from the three-oh-five on songs with the top hip-hop stars in the United States. The result has been one successful album after another and a half dozen or more chart topping hits that are billed to him, even though producers like Cool & Dre and The Runners deserve the accolades more. They provide the red hot backdrops that DJ Khaled's all-star roster of rappers flow over on songs like "Holla at Me" and "I'm So Hood." Two years ago I closed a review of DJ Khaled's "We the Best" with this note:

"The album would be a lot better if he'd just shut the hell up, and would be a lot more honest if it were billed 'DJ Khaled Presents' instead of letting him take all the credit for all the time and effort put in by other people. Other than that though this album is good."

Well shut my pie hole! Apparently DJ Khaled was listening, as his new 2009 album is titled "DJ Khaled & E-Class PRESENT Live From the 305." This is the kind of truth in advertising I've been asking for all along. Even the press release accompanying this CD notes this is a "new compilation featuring Miami's finest" and I'm loving that since that's all any DJ Khaled album has ever been - hip-hop compilations that lean heavily on his Florida homies. Who is E-Class though? Why does he get co-credit as the presenter of this album? E is the founder of Poe Boy Music Group, which since 1999 has been pursuing the rising stars of Florida like Billy Blue, Brisco, Flo Rida and Rick Ross and signing them to deals. Not surprisingly these artists are heavily "presented" on "Live From the 305" including on the lead single "Black Shades," a Jackpot produced track including Blue, Ball Greezy and Brisco. It's a decent electronics heavy song that will probably send women rushing to the danceflo' to drop it low, but personally I prefer the Raw Smoove laced "Ain't Shit" from Trina featuring Shonie that precedes it:

"Nah I ain't shoot him, cause he ain't worth that
The purse he bought yesterday, I took that shit back
I got them 12 stacks, I bleached all his clothes
So he know what's gon' happen when he mess with other hoes
I burned all his shoes, I swiped all his cars
Bought a Gucci off the internet and sold it in the yard
Sucker went dead broke in just three hours
After the transaction, penthouse, Trump Towers"

Trina has done the woman scorned rap before, but few women in the game do it as well as she does, and Raw Smoove lives up to the name with a backdrop that's quiet storm rumbling with a harder attitude. The opposite end of the spectrum would be "How Much" featuring Redd Eyez, Flo Rida and Juvenile. Once again the production lives up to the name, as Sinista matches a finger snapping beat with simple but deadly melody, which lets Juvenile set off the opening verse perfectly:

"Get yo' ass up in here, let me run this thang in ya
Hopin you don't provoke me to spend all my change with ya
Get the pussy and jet out, see these are my intentions
So I pay when I wanna play I'm just waitin fo' yo' permission
See we got a commitment, only for a few minutes
Let me look at your wisdom tooth, I'm tryin to be your dentist
Me and you somewhere butt-ass naked would be splendid"

I appreciate Juvenile's up-front candor on the song, just like I appreciate the honesty of "Live From the 305" letting you know right what it is from the jump. One can respect the hustle of DJ Khaled and the truth behind this compilation though without being a fan of every song on it. The best thing about "That's Wat It Iz" featuring Hennessi & Webbz is the Arizona Slim beat. Everything else is bad about it, from the misspelling to terribly inappropriate braggartry like "I'm Webbz, pussy nigga, who's asking?" Everyone Webbz, everyone. Nobody outside Florida has heard of you and nothing here suggests they'd want to. Suthun Boy's "I Ain't Him" is another song with a decent backdrop layering up pianos thanks to the Morris Brothers, but Suthun is a low-rent Trick Daddy with raps like "Y'all know just how I move/Fuck all them other dudes/I hit that caper dude/I get that paper fool." UGH.

Not all of the unknowns are disappointing though. Brianna's "Duh" is an amusing send-up of Valley Girl slang that sounds something like crossing Princess Superstar with Lil' Kim. Billy Blue's "Fresh From Head to Toe" is probably the album's sleeper hit, as the bombastic Gorilla Tek horny horns are well met by Blue's charismatic delivery. And of course "Live From the 305" features some of the established Florida rap stars like Flo Rida, Rick Ross and Pitbull rapping with the new jacks on "Yayo" or Ace Hood and Brisco teaming up with Unda Surveillance on the surprisingly dope "Fuck Who Don't Like It." Three things are notably different on this DJ Khaled album though compared to previous compilations: the lack of guests OUTSIDE of Florida, the lack of The Runners, and the lack of Cool & Dre. Those facts and an overwhelming 19 tracks make "Live From the 305" an interesting if erratic album that like so many compilations would have been twice as good if it was half as long. Pared down to the best of the 305 this would have been Khaled's best AND most honest album, but as is it's slightly above average.