:: Jamla/Duck Down Records
as reviewed by Patrick Taylor 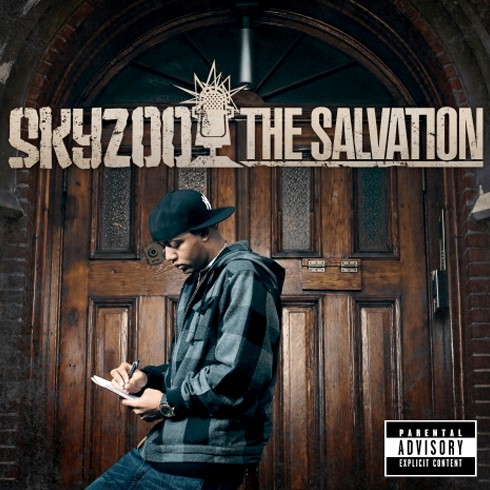 Skyzoo is a Brooklyn MC who has released a string of mixtapes, including "The Power of Words" with Statik Selektah and DJ Drama. "The Salvation" is his debut album. If you look at the back of the album, you'll immediately notice that there are no other rappers on the disc. Zip. Zero. No features, no phone-in verse by Lil Wayne, no posse cuts, no verses by weed carriers or friends of friends. It's Skyzoo's show and Skyzoo's alone, barring Carlitta Durant's vocals on "Easy To Fly." It's a daring choice for an up and coming rapper to go at it totally alone, but it makes sense. "The Salvation" is an intensely personal album, so it's fitting that Skyzoo tells the whole story himself. He also has the chops to pull off 16 solo tracks.

Skyzoo straddles the hip hop line that has introspective rappers like Kid Cudi or Atmosphere on one side, and street rappers like the Clipse on the other. On songs like "The Shooter's Soundtrack" and "The Beautiful Decay," he makes self-described "theme music for peddlers" that is steeped in the street drama of a man trying to get by any way he can. On "The Necessary Evils" he chronicles the allure of the streets, rapping "Same song, different DJ/Download it if you need it on the replay/Call it the necessary evils/I ain't tryna get by, I'm tryna speed through/We tell this corner goodbye as soon as we through."

He also raps about his personal issues in a way that the listener can relate to. He doesn't resort to navel-gazing or egotism, but instead is real about his shortcomings, fears, and struggles. "Under Pressure" is about a relationship falling apart, and you can feel the pain and resignation in Skyzoo's voice, without it seeming like you are giving him free therapy. "Dear Whoever" is about falling out with a friend, with Skyzoo dropping heavy lines like:

He sounds disappointed and sad, but not self-pitying or bitter. He doesn't waste time whining, and doesn't feel the need to brag too much either. He flosses a little on "Popularity," but as he explains, "I'm not bragging, I'm just expressing the truth." He's backed by stellar production by 9th Wonder, Just Blaze, Eric G., Nottz, Needlz, Ill Mind, Best Kept Secret, and Black Milk. They offer a mix of old-school boom bap and soulful beats. Out of sixteen tracks, only one (the radio-friendly "Easy to Fly") is less than great, and even that it isn't horrible. There's no filler, no garbage, and only one skit, a two minute phone conversation tacked on the end of "The Shooter's Soundtrack."

If I had to make one criticism of Skyzoo, it's that his even-tempered flow sometimes threatens to get buried in the mix. That's nitpicking, though, because "Salvation" is consistently good, and frequently great. It has the raw honesty of a backpack rap album with the ruggedness of the streets. In the press materials accompanying this record, Skyzoo says he wanted to make an album worth the listener's fifteen bucks. He's definitely succeeded. "Salvation" is not only one of the strongest debuts in a while, it's one of the best albums of 2009. Go buy this right now.