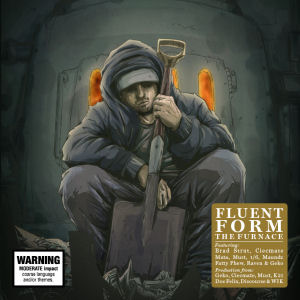 Melbourne's finest is back with his sophomore album "The Furnace." Not familiar with the freshman effort? Not a problem. As it happens we have that review in our archive courtesy of Patrick Taylor. Being exposed to Fluent's form of hip-hop for the first time, Mr. Taylor took a shine to it and penned these words about the cheeky MC:

"Fluent Form doesn't try to bite the subject matter of American rappers, and steers clear of tales of street crime. Instead, he offers a localized version of hip-hop that sounds authentic and real."

That's all one can ask of any artist from any part of the world - sound authentic and real. Unfortunately these are qualities that often seem lacking from brand new artists, who simply opt to imitate what's commercially successful in the hopes of quickly cashing in.

It's safe to say Fluent Form doesn't have that problem, for a variety of reasons. The easiest way for me to start is to describe who Fluent Form would appeal to - fans of Jedi Mind Tricks, R.A. the Rugged Man and Ill Bill. Unintentionally that may be implying there's an ethnic factor to his appeal, but it's more a factor of the fact Fluent forms lyrics that are unapologetically dark and gritty, and the beats reflect that persona aptly. Few albums can make you picture a city landscape where towering monoliths abut dark smelly alleyways the way "The Furnace" does, which is surprising given that's a reputation associated more with Chicago and New York than the major metropolitans of Australia. Nevertheless "The Furnace" has some of the hardest and nastiest tracks you'll hear in 2009, among them Geko produced tracks like "Lead Pipe Languages," "The Furnace Cometh" and "Endless Road." Whatever experiences shaped Form lyrically also shaped Geko musically. Ciecmate also checks in with dark piano keys for "Repent," while Must lives up to his name on "Bright Lights, Dark Shadows." You can literally hear people playing craps in the backdrop of the track - that kind of ambience is much appreciated.

Another reason Fluent Form doesn't have to worry about being pegged as a style biter is that his delivery itself couldn't be bitten in a million years. As a U.S. resident hearing this with American ears, I have to speak upon it from my perspective, but for my Australian readers I'll offer this analogy - think of the first time you heard Lil Boosie, Gucci Mane or Paul Wall. If you were a little baffled by the accents on first listen until you got used to their voices, that's pretty much the same reaction a head in North America will have to Fluent Form. To say his accent is thick would be an understatement, but to say it's as thick as Vegemite on toast might come close. I honestly think even some of his fellow Aussies might have a little trouble with his flow at first, vowels flying every which way other than the direction you'd expect. Despite that if you really listen, and I mean REALLY listen closely, the bars that Fluent Form is spitting are perfectly matched to the dark beats he raps on. Take "Paper Chase Days" for example:

"Chasin the cash, hatin the bank, run play fetch
With one day left to fix up unpaid debts
Sellin drugs always an option but I opted for sellin CD's
A constant balancing beam when stalking talented streets
[...]
Hardly any time to rhyme, but not any mind rewinds
Hypocrisy line for line, it's stoppin me find my shine
Hard to do, not a major in any occupation
Too many commonplaces, so many paltry payslips
Barely honored face it, pay tax on honest wages
Chumps and changes like compositions in my hip-hop arrangements
Always a negative view"

Surprisingly for a rapper who so wholeheartedly embraces the dark, dirty and disturbed in life "The Furnace" is an uplifting and perhaps cathartic experience. Form's struggle is one all but the silverest of spoons can appreciate, always trying to get ahead but barely staying afloat, never taking for granted the success he can eke out and sometimes working two jobs just to support his one passion. There's no question Fluent Form is passionate about every part of his hip-hop art, so it's a shame that for some his accent may be the only impediment to accepting him as dope. Give the beats a chance first even if you don't follow the flow, and with enough time you may find Fluent fits into your form of hip-hop music too.