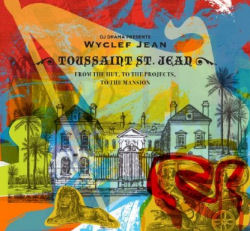 Wyclef Jean has "fuck you" money. During his time with The Fugees he sold over 22 million records, enough records for every man, woman, and child in New York State to have a copy and still have three million left over. His first solo record "The Carnival" sold 5 million copies worldwide, and even got suburban soccer moms dancing with its hit single "Gone Till November." While his later records have never matched those insane sales figures, they never really needed to. Wyclef had his paper, and along with it the power to do whatever he wanted, be it charity work, production for other stars (both hip hop and pop), or the patience to bid his time waiting for Lauren Hill to stop taking crazy pills and make a new Fugees record. When you've got millions in sales under your belt there is very little you can't buy, except respect from a generation that wasn't around when you wrote everyone's favorite record.

With all the sales an artist could ever want already on his scorecard "From the Hut, To the Projects, To the Mansion" shows a different side of Wyclef. Hungry as hell and stepping up to hip hop's dinner table ready to take the meal off any plate he sees. Unlike so many rappers whose biggest hits were in the 90s Wyclef isn't bitter that the current generation might confuse him for will.i.am when seeking an autograph, and then ask him "what the hell is a Fugee," a story he recounts on "From the Hut..."s banger of an opening track "Warrior's Anthem." 'Clef just sits the youngsters down for a little dose of history:

"I'm a fan, but no I'm not will.i.am
Let me introduce myself to the new generation
I'm Wyclef Jean, singer, songwriter, composer
In high school I used to be a battle rapper
Then I got with the Fugees
Ah haters its fifteen years later still sold more than you all put together
That's just a piece of the biography of Wyclef Jean
But when I spit call me Toussaint St. Jean"

It's a dignified response to a punk kid whose record collection probably doesn't even acknowledge hip hop existed before the year 2000. Jean isn't pissed. He knows his place in the rap world, and it seems he'll be damned before anyone else forgets it. "Warrior's Anthem" features pieces of a lifetime's worth of stories taken from the diary of a dude who knows what it means to come from nothing. Not as in "I'm from the projects, I came from nothing" but "I'm from Croix des Bouquets, Haiti. You don't know the first thing about humble beginnings." He knows there is no glory in violence, but he's seen violence in the past and it changed him. He's known poverty so great that he thought moving into the projects meant he was rich. This tapestry of storytelling is cemented by Jean's flow. When the laid back swagger of a man who doesn't need to scream to prove he's the shit gets paired with the mournful swell of a church organ and simple snare beat it's easy to imagine Jah himself nodding his head up above to the groove.

The inspiration for this newfound fire is the 18th Century Haitian revolutionary Toussaint L'Ouverture, a freedom fighter who liberated the people of Haiti from European slavery and changed the way world power looked at Wyclef's homeland. Taking Toussaint's story as a coat of arms into battle Wyclef recreates himself as T.I. Toussaint, an embodiment of the fierce passion and fighting spirit of a Haitian warrior, demanding respect and never toning down his message due to what people might think. Even while its roots are firmly planted on another island "From the Hut..." is a decidedly street album, hood enough to feature a surprise (and killer) verse from Maino on "You Don't Wanna Go Outside," which isn't announced anywhere in the track listing for some reason, yet bold enough to feature Ms. "Girls Just Wanna Have Fun" herself Cindi Lauper both singing and rapping on "Slumdog Millionaire." While Lauper might seem like an unusual choice for a rapper, especially a rapper who's showing a new found aggressive side, to feature on his record she's a product of Queens, the same area of New York that brought the world Nas, 50 Cent, Rakim, and Mobb Deep. While she might not have been moving weight or packing a piece her upbringing gives her insight into the song's pain and provides a bit of unexpected light in a deceptively dark track.

The insight on "From the Hut, To the Projects, To the Mansion" into what makes an artist as legendary as Wycelf, and face it you might not love the guy but he is a legend, tick is reminiscent of the psychological and artistic firebomb that was Lil Wayne's first "Dedication" mixtape. It comes as no surprise then that "Dedication"s mastermind DJ Drama was also on hand here to help insure that all the elements were put in the right place to create a record that sets itself apart in Jean's catalog. I've been hard on DJ's in the past, but Drama gets props here. Like a talented chef takes produce grown by someone else and meat raised by someone else and creates a feast out of it DJ Drama knows how to help make sure when dinner hits the table it's hot. Without personally providing any actual production (Jean actually did most of it himself with the help of collaborator Jerry Duplessis) Drama still leaves his finger prints on the record, only vocally making his presence known in a series of interludes that connect 'Clef's story with the struggle of those raised from birth on American streets. Unlike any of the thousands of times I heard Drama shout his name over tracks in the Gangsta Grillz series this is the first time I've given a shit when he opened his mouth.

I keep saying record, but it isn't. Technically "From the Hut, To the Projects, To the Mansion" is an EP. A quick taste to get your appetite going before Jean drops the simply titled "wyclefjean" next year. This is supposed to be a throw away release, albeit one with sixteen tracks. Imagine my surprise when I sat down to bit into a Twinkie and ended up tasting prime rib. "From the Hut..." is a simply fantastic album. It's got hysterical club numbers, such as the autotune mocking "Robotic Love," and deep street cuts like the chest thumping fuck you to haters "The Streets Pronounce Me Dead." Hell he even manages to give a brief bit of props to a former protégé on that track, rapping:

"They say I spit so hard my ghostwriter must be Canibus
But far from it, this is how I started
But my battle raps couldn't get me groceries from the supermarket"

It's a musically and lyrically adventurous record. Never turning his back on the roots, reggae, rock, and soul he's explored since his time with the Fugees while reopening the door to hip hop and making sure people remember he's still here. If this is the first strike in Wyclef's revolution it's dead on. Wars are won battle by battle, but in Wyclef Jean's fight for respect this is a damn good start.