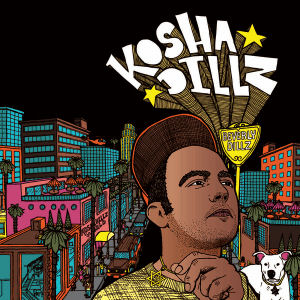 If buzz equalled record sales, Kosha Dillz would be platinum already. We've gotten bios, hard copies, downloads, freestyle videos on YouTube - you name it. Clearly everybody involved feels Kosha Dillz is the next big thing - possibly even the new Asher Roth for 2010. Here's a little snippet of their bio on Dillz to show you how big he is to his peeps:

"This unorthadox boom bap-ist's knowledge of emceeing brings the pride back that you might have once lost. Having trained with world reknown artists like C-Rayz Walz, Killah Priest and Remedy Ross of the Wu Tang Killah Bees, he is for sure to be the most amazing one man stage show you might ever see, with crossover appeal to the hardest of the street."

High praise indeed, making Kosha Dillz almost as hard to ignore as his PR people. As it turns out this isn't even the first time we've written about Dillz - Justin 'Tha Shiznute' Chandler covered his "Freestyle vs. Written" release with C-Rayz Walz back in aught-eight. Aight. I'm sold. Let's find out why Kosha Dillz has suddenly gone Beverly Hills and see if it's a change for the better or for the worse. "Beverly Dillz" opens with the stripped down "DooDoo," plucking one to two isolated notes over echoing drums.

"Crumbs off coffee cake, girl gained a lot of weight
Wait, work it off, crooked teeth, take your braces off
Punk rock, headbang, lipstick, smear it off
Little bitter kids tipsy on the Smir-i-noff
[...]
Stupid is as stupid does, stupid rappin just because
Stupid stuff I'm puking guts out like what the uhhh
na-na, na-na, stop drop and lock
Rolled over grave and rock, cemetery hustle paid a lot"

To be honest I'm not overwhelmed. The production is technically sound, so you can't hate on the quality of the track, but Dillz' stream-of-consciousness rap style has been done before and done better by others. References to Master P seem a little dated in 2010, and trying to come off as cool by promoting drinking 'til you puke seems cliche given Asher Roth already locked frat rap down last year. Still it may be too early to take a cynical view, so on take two we'll hear his "L.A. Ish" and find out why this Garden State native is suddenly obsessed with the Cali life.

"Thriller off the Beverly Dillz, the boulevard skills
Like Ari with no Gold, the Entourage
Johnny Rocket with the ring pop, sorry
Three licks to the center Tootsie Roll
Hook me up, cause I'm talkin reckless, respect it
Relief roll up, Comfort Inn and a Lexus
Stomp the card up like vroom-vroom yeah!
I said stomp mom's car up - vroom-vroom yeah!
Fred Siegel forty dollar lunch, fresh-ass yeah
Everybody wave their credit cards up in the air
'til the shop girl's open like she just don't care
Credit mad bad, paid off in a year
Boyfriend gettin mad, girl hookin up with another chick
This is L.A., Keisha on some other ish
In-N-Out burger, cows get murdered
Bunch of actors that I never heard of
Some L.A. ish, just some L.A. ish
Everybody at the bar, everybody a star"

Aside from a somewhat simplistic rhyme style (nobody should do "air" and "care" any more) it's a little hard to tell whether Kosha Dillz is celebrating a vapid West coast lifestyle of conspicuous consumption or making fun of it. That's a problem in general with Kosha Dillz - it's hard to tell when he's on the level. Like a lot of artists under the Shemspeed umbrella he's clearly serious about his Jewish faith, as evidenced by songs like "Pray" and "Kol HaKavod Lirkod," which translates to "It's All Good to Dance." The latter is actually the best song on "Beverly Dillz," as the bopping middle-eastern beat and rhythmic hebrew chanting make for a foot-tapping head-nodding song in some ways indistinguishable from the Afro-Carirbean stylings of Wyclef Jean.

Given Dillz is at his best when he embraces his cultural background, "Beverly Dillz" is a bit of a confusing mish-mash. It's clear Kosha can be a clever and funny rapper on tracks like "Puddles" featuring Yak Ballz, but the sing-song delivery isn't all that appealing. The track "Cellular Phone" may be the one track where all of Kosha Dillz' desires come together - to mock and embrace a vapid lifestyle while simultaneously dropping lyrical gems in a smooth manner. The problem is these tracks are the exception and not the rule, and if tracks like "Fat Love" and "Bubble Gum Pop" are meant to be a joke too I'm not laughing. Kosha Dillz is clearly as talented as he is confused, and if this was meant to be his big crossover album it's actually a big step backwards. If he's aiming for parody he should follow in the footsteps of Lonely Island, and if he's aiming to be taken seriously as a rapper then Asher Roth provides the ideal example, but on "Beverly Dillz" he doesn't successfully do either.