Dood Computer and Stir Crazy :: Penny Dreadfuls :: All In Merchandise
as reviewed by John-Michael Bond 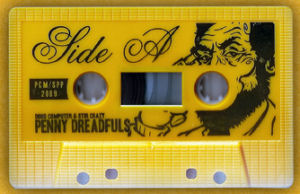 You can't knock the hustle of hungry dudes willing to put themselves out there to get their music heard but, like any reviewer will tell you, when it comes to self released, self promoted records the number of hungry cats without the talent to make it spamming your mail box is simply massive. Drive is great. There have been shit tons of fantastic artists who've never made it simply because they didn't have it. If you're one of the rare exceptions though you'll stick out like a diamond in the rough; glistening in the pile of "hey dude would you review my record?" submissions. My latest addition to the exceptions list is Dood Computer and Stir Crazy, and their simply ridiculous "Penny Dreadfuls" tape.

Yeah, tape. The release also comes with a download card so you'll be able to bump it on your iPod, but hell if I could find a CD available. The format works for the interplay between Dood Computer's bipolar lyrical self loathing arrogance and Stir Crazy's "you got your peanut butter in my chocolate" blending of old school beat programming over rock elements. Like vinyl a tape makes you work to find a track, leaving you more likely to just sit down and actually listen to the whole damn thing as opposed to skipping around for what sounds like a hot track. What was probably just gimmick packaging ends up being the push listeners need to give "Penny Dreadfuls" most musically ambitious moments, giving Crazy's production time to work itself into your brain while highlighting the hysterical rapping of Dood Computer.

Take the self effacing ode to the carriers STD's "Rachel Profiling," the funniest tale of crotch monsters I've heard since "Indian Girl (An Adult Story)." Stir Crazy's production helps tell Computer's story with what I first felt sounded like a disco song played in some cheesy bar lounge, but listening like it was a tape I didn't say "next" when the beat didn't initially draw me in at first. Sticking around longer left me laughing my ass off. My inner feminist is pissed at me but hey it's been awhile since I heard someone bring up syphilitic insanity in a rap song, let alone as flippantly as the line, "She probably doesn't take her meds, then her father wonders why she's all demented in the head."

Dood Computer straddles the line between underground cynical punk rappers (Cage) and the happily pornographic hipster rap dudes like Spank Rock throw out. One moment he's laying out Larry Flint levels of filth, the next he's spitting shit like "I want to make mistakes and excuses, so I got something to write when I make some music" and flipping off "D.I.Y." artists who want other people to do all the work for them. Stir Crazy lets his music do the talking for him instead of shouting his name over the lyricist's words, something I wish more underground producers would clue in on. It's obvious his taste in music goes deeper than hip hop and the brief moments of rock n' roll or country that pop out from behind the snare hits give simple tracks flavor while occasionally exploding into full blown bridges.

Historically Penny Dreadfuls were inexpensive, cheaply made, books that told sensationalistic tales of sex and violence for the amusement of the public. They weren't the stories you'd tell your mom you were reading, but it was stuff you'd want to read. "Penny Dreadfuls" the record aptly named. For six bucks you get a full length album on a cassette and download card, which anyway you shake it is a hell of a deal.

Dood Computer and Stir Crazy are out there trying to make a name for themselves, reaching out to writers instead of waiting for us to find them. It's important to note though they had something else going for them, they're actually good. We give out our emails because of artists like this. Like I said, it's hard to knock someone's hustle when they've got the hunger to make it. More of you unsigned guys who hit us up could take a lesson from this self released record. You only get one chance to make a first impression when you're an artist. We're easy to get a hold of. The hard part is making a hot song. Wait until you've got your shit together to get at us, so when we say "sure I'll listen to your songs" we find ourselves a "Penny Dreadful" instead of something just dreadful.