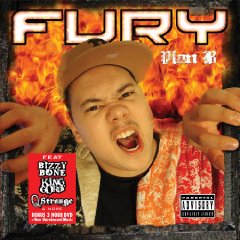 As a lifelong Connecticut resident, I like to fancy myself hip to most of our small state's hip hop lore. I know, for instance, that Stezo of "It's My Turn" fame now owns and cuts at the barber shop across the street from the University of New Haven. I know that the Milo Sheff often heard on Hot 93.7's local hour and seen periodically at Toad's Place is the same Milo Sheff who was lead plaintiff in the infamous Sheff vs. O'Neill school desegregation case in 1989. I watched as Slaughterhouse headlined their first show as a group in the Elm City last June, and I have friends who still pump their fists at the end of Raekwon's first verse on "Incarcerated Scarfaces."

Although the Skinny Boys put CT on the hip hop map in the early '80s, for the most part the Nutmeg State has lacked national stars and even the regional identity of "New Jeruzalem" and Massachusetts; touring artists seem to view it as merely a stop between New York City and Boston. If you've stopped in at any of CT's hip hop spots in the last decade or so, you've probably seen MCs tellingly fitted in Yankees or Red Sox caps sporting decidedly East Coast styles over decidedly East Coast beats. The latest Connecticut artist to make national waves is Willimantic rapper Apathy, whose underground rap and collaborations with Celph Titled, Jedi Mind Tricks, and Army of the Pharaohs have garnered coast-to-coast attention.

Fury, born Jason Flores, is a heavyset multiracial MC hailing from Bristol, a small city west of Hartford that is also home to such oddities as the nation's largest wooden roller coaster, Boulder Dash, and the world's largest sports network, ESPN. Formerly a member of the group Kapital Punishment, he's been frequenting the Webster Theatre in Hartford for a few seasons, as well as other regional hip hop venues such as South Street in Waterbury and Toad's Place in New Haven. On 2009's "Plan B," released through Long Range Distribution by Leathal Wreckords, he enlists the talents of his heroes Bizzy Bone and Spice 1 as well as cult favorites King Gordy, Q-Strange, and other underground rappers.

I wouldn't quite classify Fury's style as horrorcore, although he straddles the line at times with death threats and the fact that he wears a Jason mask on some of the cover art. Armed with an aggressive delivery, he lives up to his name by delivering angry hardcore rap. "Plan B" features a variety of moods and approaches, from Eminem-influenced monologues to tag-team posse cuts to eerie graveyard rap.

Production is generally solid but rarely outstanding. Most of the tracklist is credited to The Mexican, with scattered beats by Y-Beats, Hi-Fly, Dr. Gigglez, Fritz the Cat, and Q-Strange, although Fury gets a co-production credit on every track. The Mexican's beats are at times reminiscent of DJ U-Neek's mid-90s production on Bone Thugs-N-Harmony projects, based on tinny piano cadences and layers of dark organs, tolling bells, strings, and frenetic percussion.

"Remember the time I told you stand up
Roll fifty fuckin' deep and throw your hands up
Look at us now, we hookin the crowds
We done shook up the crown, man, just look at us now
On karaoke, we used to rap
Now we packin' gats, livin' fat, puttin' CDs on the map
I'm rhymin', you done, you think I'm rhymin' for fun
One rhyme and you're done, I got no time you should run, so
You're fuckin' with a genius
Believe this when I speak this that I put it on Jesus
You can't reach it when I preach it
I mean it, can you feel it, I'm not feelin' the weak shit
And all the times you guys done showed love
Every time I had a show and you showed up, rolled up
Chanted my name, took a stand with some faith
And bought my tape even when your man said I'm lame
I'll never forget this, it's hectic when I rep this
Like I said bitch, you keep this going, I meant it
(I love you) Nothing can stop me from loving you
Nothing comes above my crew, man I'm not fucking with you
All these haters rip my name up
Just to get some attention and then I flip their game up..."

The album starts slow with the livid yet banal title track and the uninspired "Ain't a Gangsta." Things pick up a bit with the upbeat "Think About Us" and a string of dark collaborations. Spice 1 even surprises with a vicious verse on the posse cut "We Murderaz" that sounds like it was cut from "AmeriKKKa's Nightmare." "Monster" featuring King Gordy, Mattrix, and Whiteout is a late standout.

Perhaps the best track is "Gon Be Aiight," featuring a can't-miss beat from Q-Strange. Over a clever, smoky harmonica loop and minimalist percussion, the trio of Q-Strange, Menacide, and Fury evoke Bubba Sparxxx trading off annoyed yet optimistic verses, like Fury's:

"Fuck tired, man, I'm sick of the game, I'm sick of the pain
I'm sick with the strain cause I ain't paid, I'm missin' the plane
To get outta here, just gotta get up outta here
In effect, we'll never get outta here, I drink a lotta beer
'Cause I spend all my money on liquor
I hustle CDs so I can pay the bills quicker
When I get six figures then I'll stop all of this nonsense
Going concert to concert and not seein' any progress
Ain't no contest when I'm rippin' up these verbs
But the star concept makes me wanna go to work
Chillin' in my Mickey D's shirt, seein' these jerks
On TV, makes me wanna scream and hit the dirt
I'm makin' rappers hurt but the shit ain't real life
Turn off the mic, I'm just some fuckin' nerd on a bike
'Cause I ain't got a damn car, I don't know how to drive
Wasted my whole life learnin' how to rock it live"

What Fury lacks most is a certain level of artistry. "Plan B" is plagued by instances of predictable rhyme schemes and hooks so obvious that they're awkward. Fury's brand of rap certainly has an audience, but when he's outshined by his guests it becomes clear what he's lacking. On "Six Deaths," King Gordy's chilling voice and slippery flow make Fury sound pedestrian, and the smooth-tongued Half Fiction sounds better over the eerie piano-based production of "Where Do We Go." This short of music thrives on shock, and Fury offers few surprises; his concepts are for the most part quite derivative. Other problems include tired punchlines ("You couldn't be the shit even if you was poopin'") and redundancy over the staggering 79-minute running time. There's simply too much music here, and a lot sounds the same. The tracklist sags in the middle with a series of contrived, unimaginative performances including "Jay's Song" and the corny "Irving Street." "Runnin' the Game" is sonically horrid and showcases the worst verses on the album.

Fury's greatest glimpses of luster, surprisingly, come when he ditches the angry stance and shows a more reflective side. "Be Right Back" and "Be Myself Again" feature slow, well-arranged, contemplative beats by The Mexican, and Fury provides personal and emotional lyrics. The former is a passionate open letter to a girlfriend he has mistreated, and the latter is an introspective study of insecurity and identity. The marriage of sentimental music and deep lyricism is a winning combination for Fury, and these tracks have some truly chilling, if not somewhat unsettling, moments.

The "Plan B" package also includes a DVD of home movie footage of a 2006 tour, most of which consists of Fury and friends eating fast food in the back seat of a minivan.

Looking forward to a new decade, it looks as if Connecticut may be carving a niche for itself as a home of dark, hardcore rap; recent releases from Demigodz and Madecipha have made ripples on the national radar with a grimy sound. Fury's style is a bit uncanny but not unappealing; his debut's highlights feature effective combinations of heated lyricism and spooky beats. Still, as a whole "Plan B" is fairly unremarkable and rarely memorable, desperately in need of some cutting of the fat. One can't help but be inspired by the intense passion Fury obviously has for his craft, but he'll need an extra push if he's going to exceed the level of the local 860 rapper.