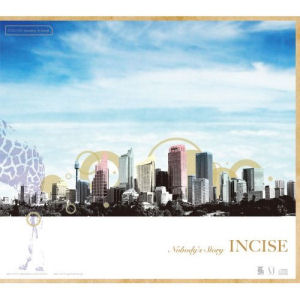 In 2007, I came across an EP released as a free internet download called "I Miss 1994" by Toronto duo Prince Ali & Incise. The title probably evokes some incredulous connotations among wary listeners, and I'll admit I had them too. There definitely hasn't been a shortage of cranky MCs complaining about how bad today's music is in comparison to the "golden age," regardless of how well they even remember those years. Well, I was blown away by "I Miss 1994," which showcased an impressive Indian Muslim rapper sporting clever, thoughtful, and often biographical rhymes in a wide-eyed and technically sound manner, and for what it's worth featured such revered guests as Tragedy Khadafi, Kev Brown, and Craig G.

The real star of "I Miss 1994," though, was the producer Incise. A problem I perceive in today's underground landscape is that there are a lot of really talented producers armed with MPCs and musical smarts who, rather than striving to make artistically creative and innovative music, are all too content to do their best Pete Rock-circa-'96 impression. It would have been easy to expect another one of this crowd on an EP titled "I Miss 1994," but instead I was pleased to find some fantastic production. By fusing reminiscent feel-good sounds and quality with a modern approach and equipment, Incise managed some spectacular tracks. While a bit nostalgic, they were fresh and didn't sound dated in the slightest, maintaining an unusual balance. I was moved enough to even track down an import copy of his subsequent 2008 release "Nobody's Story."

"Nobody's Story" does not sound like "I Miss 1994," which impresses me first in that it indicates versatility and secondly because the beats on "Nobody's Story" are just about every bit as good as those on the predecessor. Incise doesn't reinvent the wheel, but he brings remarkable quality and enough originality to make these show-stopping productions. His beats here are rich, layered, and feature a wide range of instrumentation, often resulting in a fairly organic quality. He's a good keyboardist and has a real knack for catchy piano cadences, marking his beats with light bass and a crisp polish. He's got his own sound, characterized by a fairly distant, expansive, echoey feel, and is partial to synthesized saxophones and muted trumpets. "Nobody's Story" has some gorgeous melodies and magical moments from a musical standpoint.

The rappers on "Nobody's Story" aren't gun-toting thugs, gangsters, or swagger rappers, but rather mellow and insightful dudes. The roster consists of such no-names that I've never heard of a single one (even Google searches prove fruitless), and I speculate this is what the title alludes to. Still, they succeed in the formidable job of supplying these phenomenal beats with verses on par. The rhymes tend to be of a philosophical, whimsical, and thoughtful nature, often recalling growing up and the familiar themes of love for hip hop and tales of struggling to make it in the rap industry. While some is a little too proverbial, it provides an eclectic mix even if it's pretty clear Incise had his eye out for a certain type of rapper. It's actually pretty remarkable how similar some of the performances are—my conclusion isn't that Incise tried to get a bunch of MCs who sound the same, but rather that such contemplative, soulful music inspires deep reflection and introspection.

Unlike most producer-driven albums, which tend to have ambiguous verses from rappers who are clearly saving their best material for their own releases, the rappers on "Nobody's Story" are hungry to impress and sound inspired, even if they can fall victim to some underground rap conventions. The only visible weak links are the 49ers, whose clichéd metaphors likening rap to a woman and a hustle, respectively, on the openers "In Love With Two Women" and "Move Rhymes," are tired.

Incise cleverly varies the tempo and mood throughout but never loses the enlightened sentiment of "Nobody's Story." The obvious standout is "Scorpion Tail," laced with a beautiful piano cadence. The Brooklyn-accented Need Not Worry spins a hook-less tale of searching for love through different horoscope signs—if it sounds corny, it's not. On "Tock," the Stereotypes drop some conceptual verses about the passage of time:

"Tick-tock, you don't stop with it
The wristwatch, it don't stop tickin'
But it seems the battery on this Timex is runnin' out
No matter when the clock strikes twelve, I'm punchin' out
'Cause it's like same day, different stuff
So I ain't wastin' a minute with it, now I'ma live it up
They say err and don't spend it while he's wastin' it
While most people try to spend their lives savin' it
Ain't no savin' it up
Go on and spend it all on a day in the sun
Sunrise, sunset, another one added up
Exit out now flip the page on the calendar
From high noon 'til the moon goes down
'Til the alarm clock sounds, still tune those out
And when now is yesterday and tomorrow's today
Lend me a second, cause all of mine been borrowed away"

The first mix features a moody beat anchored by a slide trombone, while the subsequent remix might have the best beat on the album, a breezy, sentimental number. It's cool how the different music changes the effect of the lyrics; on the former, they come across as dark, while on the latter they sound hopeful. "Your Soul" is a musical gem, with a building piano arrangement and well-orchestrated hook featuring female vocalist Shaunise. She and rapper Don Cerino combine for an encouraging and inspirational winner.

"Nobody's Story" has a handful of well-placed, appropriately short instrumentals that are fantastic, sporting complex and deep compositions. Clocking in at well under fifty minutes, the album is poignant and consistent. At the time of this writing, the album is only available physically as a Japanese import, although it's been heavily bootlegged since its 2008 release.

Incise shows on his second release that the magic touch exhibited on "I Miss 1994" was no fluke, even when trying on a more contemporary style. While perhaps not as immediately irresistible, he again shows uniqueness in sound and quality, proving a great ear for feel-good music. Incise has a universal sound that defies regionalism, one that stands out even among the bevy of today's talented underground producers. Hopefully, for his next release he'll find greater distribution. Only time will tell if he can make a name for himself, but for now I expect a limited listenership will find his music extremely enjoyable.