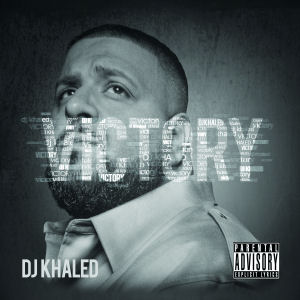 Back in the late 80's, a decision was made to lower the maximum number of rounds in a boxing match from 15 to 12. The major catalysts from this change was a concern that the longer fights were too long and findings that proved the most serious brain damage was caused in latter rounds of any given fight. Following a tragic contest in 1982 between Ray Mancini and Duk Koo Kim, which resulted in a 14th round TKO victory for Mancini and a head trauma-related death four days later for Kim, reform started to sweep over boxing's sanctioning organizations.

At this point, you're probably wondering why in the hell I'm talking about boxing here on RapReviews. Well, this album has twelve tracks on it and it's titled "Victory". The temptation was too much for me to resist. The countdown to the release of the album was similar to the "24/7" shows that would air on HBO as a big prize fight approached, as Khaled and his camp would release videos for media outlets such as YouTube. He comes into this bout with a record of three wins and no losses, but none of the victories have been by way of knockout.

The fight opens with an intro that would be the equivalent to Muhammad Ali coming out of his corner, posturing and taunting, but never throwing a punch. Round 2 proves to be much more competitive and interesting as Khaled comes out with a fast and furious flurry of punches that includes Rick Ross, Ludacris and Snoop Dogg. "All I Do Is Win" was the second single released from the album and turns out to be one of Khaled's best rounds of the fight. Round 3 isn't as fast paced, but a few solid shots still land in the form of Young Jeezy's verse on "Put Your Hands Up". The tempo picks up once again in Round 4 as Khaled becomes "Fed Up" and starts throwing uppercuts of Ross & Jeezy, hooks of Usher and the one-two combination of Lil Wayne and hip-hop's current version of the Golden Boy, Drake.

At this pace, it's looking as if Khaled is going to cruise to yet another win. He starts throwing power punches in the form of Nas, and while those shots would have been enough to put most opponents down on the canvas, this one manages to stay on its feet and winds up making it though the round. The next few rounds fly by with little fanfare and are largely forgettable. While the beats are exceptional, the lyrics of Birdman, Jim Jones and Soulja Boy Tell 'Em won't be scoring knockouts anytime soon. Rounds 9 and 10, "Bring Real Rap Back" and "Bring The Money Out" respectively, turn out to be the weakest rounds of the bout, allowing the naysayers to creep back into the fight.

Perhaps recognizing how close of a bout this has become, Khaled comes out swinging in Round 11, throwing everything he's got at the competition. Ace Hood and Young Cash are the most effective punches on The Runners-produced "On My Way", but the damage is minimal. The main event closes out with "Rep My City", which severely lacks the power that was in the punches thrown in the beginning of the fight. The final bell rings and both fighters embrace before retreating to their corners to await the decision of the judges.

To the scorecards. The first judge seems to put a bigger emphasis on the production, and with tracks from the likes of The Runners, Schife, The Inkredibles and DJ Nasty, he scores the bout in favor of DJ Khaled. The second judge wasn't too thrilled with the lack of lyrical artists on the album, proclaiming that the highlights of the fight were the verses from heavyweights (pun intended) like Nas, Bun B and Busta Rhymes. Unsurprisingly, he scores in favor if the naysayers.

With the first two judges split, deciding the winner was left up to me. In his previous bouts, DJ Khaled always came with at least one devastating blow, a hit that was undeniable and seemed to stick in the minds of any opponent for the remainder of the battle. This time around, that was not the case. There's no "I'm So Hood", "Out Here Grindin'" or "We Takin' Over". What we're left with is just an average fighter with flaws that can be exposed and exploited. Officially, I scored the fight in favor of the naysayers by the slimmest of margins, giving Khaled what would amount to his first loss. Perhaps in the future, Khaled will come with a bit more strategy and diversity and won't be so quick to declare himself the victor. If this were a 15-round bout, I'm not even sure if it would have gone the distance.