Kaigen21Meiso :: Root Is the New Leaf :: Takaba Records
as reviewed by Patrick Taylor 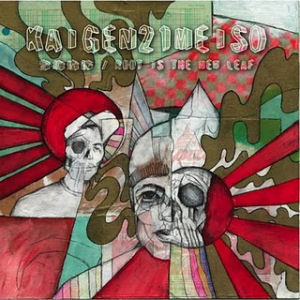 Kaigen21Meiso is a collaboration between Tokyo rapper Kaigen and Honolulu-based rapper Meiso. Both MCs have been active in the experimental hip hop scene, and "Root Is the New Leaf" is twelve tracks of glitchy, boundary-pushing hip hop in the vein of anticon. Former anticon affiliate Sole contributes production, as does K-The-!???,  Omid, Curse Ov Dialect, Michita, and Kaigen.

Before you glance at the score, see a "5" and decide that this record isn't worth your time, let me explain something: they rap in Japanese, so I can't understand a word they're saying. It's totally possible that Kaigen and Meiso are dropping some serious knowledge, and I'm just too ignorant to understand. I'm all for hip hop in a foreign language I do understand, but with an art form that depends so much on the use of words, understanding the language is a prerequisite for enjoying the music. I don't know Japanese, I'm totally ignorant about Japanese hip hop, so right off the bat I'm destined to not get this album.

Kaigen and Meiso don't do a foreigner any favors, either. They rap in rapidfire Japanese, often to a different tempo than the beat. They rap in sixteenth notes while the beat is going 4/4. It's experimental, see, so it's not about rocking a beat or maintaining a groove. They mix things up by bringing in a German rapper and Modulok, the Canadian rapper who was part of the awesome but now defunct Red Ants. Modulok's monotone baritone meshes better with the music, but his appearance is brief.

The production is best described as washing machine music, meaning it sounds like sneakers thumping around in a Maytag. The various producers draw from drum n' bass, creating staccato, repeating drum beats that are layered with synths. It's jagged, industrial, noisy, inhuman, and electronic. At best it sounds like the kind of paranoid android music El-Producto does so well, but too often it just sounds like noise, especially when paired with the aforementioned rapidfire Japanese. Then end result is like having a tooth drilled while someone is using a jackhammer.

Fans of experimental hip hop, and glitch/noise might appreciate this on a deeper level than I was able to. I never managed to get through the entire album, but I realize that part of that is due to my inability to understand what the rappers are saying. If you understand Japanese and like music that is challenging and takes risks, "Root Is the New Leaf" might be the album for you. To me it just sounds like a hot mess.