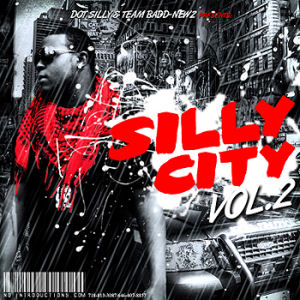 Brooklyn rapper Dot Silly opens 2010 with a download mixtape, "Silly City, Vol. 2," an impressive fourteen-track listen from an artist who definitely appears to be on the come-up. "Silly City, Vol. 2" serves as a showcase for the 22-year-old MC featuring all new tracks and production.

Dot Silly is not a conceptual rapper, but his charisma, swagger, and energy make "Silly City, Vol. 2" a memorable listen. A telltale mark of a successful New York rapper is an insatiable hunger at a young age, and Silly is dead-set on establishing his name and his music well beyond the five boroughs. With an aggressive, versatile flow, Silly comes armed with boasts and punchlines for days that the DJ Khaled set should find extremely appealing. On the opener "Get Ready," he recalls,

"I used to sit in my crib, and listen to Big
Roll up, and sorta wish that my life was his
I was born to live a life but I was ready to die
Then this nigga smartened up, I started to realize
Ain't no life after death so you need to act wise
And once a nigga dies, you died, so damn right
I got to keep a semi-auto on me all the time
Just as long as the boys don't rush, a nigga fine
Nowadays, see, your best man could be a snitch
When I'm hangin' with my bitch, only time I drop a dime
So I'm sicker than the average, plan this
Operation kill all the masses, drastic
Unless you go'n be called, you better not pick up
You soft like an R and B song, you get hit up
This hip hop's that, so let's pour a little liquor
It ain't somethin' terrible, but Silly's somethin' sicker
The doc couldn't cure him, I was sick, see, I spit up
My flow scared niggas, see, they all had the hiccups"

Dot Silly produces his own stuff too, and his heavy, big-beat productions would be equally at home on a Rick Ross or T.I. album. His songs are marked by big, dramatic hooks, speaker-thumping bass and percussion tailor-made for top-down cruising and open windows, and radio-ready sensibility. The music on "Silly City, Vol. 2" is aimed straight for the streets and takes no prisoners. Early highlights include "Highest Light," an open letter to his loved ones, the grimy T-Eazy duet "Angels," and the Drake collabo "Fear."

"Look I got the block on lockdown
Fiends can put their pipes down
This the type of music for all my niggas on lockdown
Whole bunch of rats so I got to worry 'bout cops now
Still up in the kitchen, I'm cookin' bricks in them pots now
It's so Silly game, I let my jewelry hang
My fitted low, you already know that's a Brooklyn thang
I chill with crooks who bang, you chill with rooks who lame
We all veterans, who better, you know the name
It's young Silly, mack millis, do a lotta damage
Homey playin' gorilla, he go'n eat lots of bananas
On the block where they blam ya
Take a shot when you stand up
You'll lay down from the straight pounds, better put them hands up"

The second half features a few quality love songs including "She Likes Me" and "Never Say Goodbye," where Silly shows versatility by slowing down the tempo and offering some heartfelt, emotional lyrics. The latter has a catchy, soulful beat in sharp contrast to his normally street-level production, as Silly tries to figure out a relationship gone wrong. "Take Me As I Am" is a deep track dedicated to a lost friend, and "Head to the Sky" is a contemplative, well-produced standout.

The mixtape is one of the most exciting new hip hop formats—the listener has nothing to lose and plenty to gain. Dot Silly is not a revolutionary artist by any means, but between his work on the mic and behind the boards he's good at what he does. If you like mainstream-oriented swagger rap, chances are Dot Silly is for you; otherwise listeners should look elsewhere. Either way I see a lot of commercial potential for him. Be on the lookout for Dot Silly.