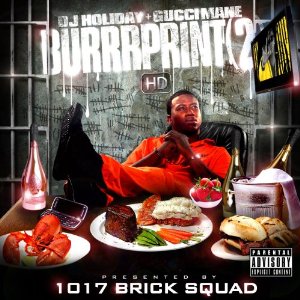 The improbable career of Radric Davis b/k/a Gucci Mane continues unimpeded. Early on a murder charge could have derailed his rise to rap stardom before it had even begun, but either due to good fortune or his genuine innocence Gucci beat the case and kept on releasing albums. In fact as the years have gone Davis' rap career has become more prolific. Gucci seems to be aware he got a second lease on life, and it's become difficult to keep up with the multitude of cameo appearances and mixtape releases he has done. In hindsight that was undoubtedly for the best, because even though Davis was able to shake the murder rap a dark cloud of legal woes continued to rain on his parade over the years. In fact as of the writing of this review Davis is one-third of the way through a twelve month sentence for violating probation on assault charges, and with leniency and mandatory time served could be out by this summer.

While Davis continues to prepare for his release and an expected sequel to last year's "The State vs. Radric Davis," there's a new album/mixtape with major retail distribution to fill the void called "Burrrprint 2." It's fairly obvious that Mane and his partner DJ Holiday intend to parody the success of Jay-Z while also poking a little fun at his Southern accent. A sense of humor certainly helps when listening to Gucci Mane albums, because his rhyme scheme tends towards the simplistic and his lyrical delivery is often unenthusiastic. There's no doubt that Radric Davis has led a serious life and dealt with very serious issues, but none of those things prevented O'Shea Jackson, Shawn Carter or Brad Jordan from narrating those issues in a very cinematic, colorful and charismatic way. The great ones engage you as a listener and bring you into their world - I have never gotten that feeling on a single Gucci Mane album. In fact on "Burrrprint 2" the guest stars eat Mane's lunch like the swollest convict in the mess hall - they don't ask they just TAKE IT - like Ludacris and his speedy punchline delivery on "Atlanta Zoo":

"Heads up, my potnah stashin bricks up on his rooftop
Whole ki', half-a-ki', quarter ki', Gucci got more quarters than a motherfuckin juke-box!
Pop pop hear the glock cock, and got a Colt 45 like Billy Dee
Semi-automatic that I keep up in the attic and a shank that's shaped like Tennessee
Uhhhhh! I cut ya, I cut ya to the white meat
And my potnah pushin mo' crack than a bike seat
I smoke the best, I get my 'dro from California
Get high and go to sleep, you couldn't wake me from a coma!"

Gucci ought to be embarrassed to be on the same song with him. Luda's quick tongue, quick wit and playful lyrical delivery jump up and down more octaves than some T-Pains songs, while even AutoTune couldn't move Mane's flow from C to G. Worse still his rap tend to be deliver the fewest syllables per second possible, re-sul-ting in an un-ex-ci-ting flow that gets ti-re-some very quick-ly.

"Birds in the living room, and the kitchen too
I'm a tiger in the bedroom ask your baby boo
I got lions tigers bears in my hood and closet too
But my gun'll stop an elephant, like Atlanta Zoo"

Thankfully because this "album" is actually a "mixtape" we get cameos that breathe life into what could otherwise be a very painful listen. "Do This Shit Again" has a hot beat from Schife and guest verses from Rick Ross and Yo Gotti. The unapologetic drug anthem "Coca Coca" brings a theoretically all-star lineup to bat, but to be honest I've found the rhymes and flows of Rocko, Shawty Lo and Nicki Minaj to be just as problematic as Gucci Mane's. Variety is the spice of life though and the menacing Drumma Boy beat fits their presentation well. "Beat it Up" featuring Trey Songz would be the closest thing to a crossover single here thanks to his contributions on the hook and Drumma Boy coming through with a high speed electronic backdrop. It's also one of the rare occasions Gucci Mane's rap on "Burrrprint 2" seems charismatic - the speed of his flow never changes but his vocal tone gives away the beat and topic are more interesting:

"Yo' girlfriend keep callin me, I feel like she's stalkin me
You at home and she with me so mornin it's an argument
Gucci Mane be doggin it, beatin it down straight poundin it
Drillin on yo' sheets, got yo' blanket at the laundromat
Wait baby girl throw it back, oh man might catch heart attack
Gucci Mane not hardly dat, smack it like I'm mad at dat"

Yes that's as close to clever or humorous as Radric Davis gets on any of the 24 songs of "Burrprint 2," many of which thankfully are skits where someone "Speaks" - 8 of them in fact not including the outro. Unfortunately when you do include it that leaves 15 songs on this album/mixtape, and not all of them have a cameo run-in, which means there a lot of unbearably monotonous tracks of lyrical thuggery without any redeeming quality whatsoever except for Drumma Boy beats. While DB has been responsible for a lot of hits over the last two years, even he can't save this album singlehandedly, and a lot of these beats aren't his best work. Skip the cliched and simplistic sound of "Boy From the Block," the uninventive money counting of "Gucci on the Rise" and the aptly named "I'm So Tired of You." While there's no questioning that Gucci Mane has become a rap star through his relentless slew of cameos and releases, "Burrrprint 2" doesn't show that he spent any of his multiple tenures behind bars trying to improve as an artist. Hopefully his current stint will do him some good.