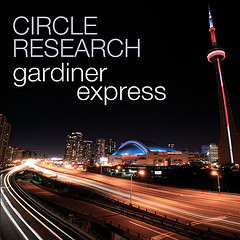 Beat tapes are nothing new to hip-hop. Although the late great J Dilla may be the best recognized purveyor of this product, it was never hard to come up on unsold and non-commercial entries in this field. After all for every Polow Da Don or Alchemist who made it big for their beats, there's literally thousands of aspiring producers out there trying to get out there and get heard. Thanks to technology this analog form has gone digital, saving thousands of producers the thousands of dollars they would spend duplicating tapes and sending them to labels, artists and studios. It's all about the dot com - or at least the dot com that forwards you to a MySpace page. That's technology - improving lives and saving money - but it also takes a little muscle out of the hustle at the same time.

Of course if you don't run a record label (or a review website people seem to mistake for one) you probably never got a bunch of unsolicited beat tapes, but if you're a hip-hop head you've probably bootlegged and/or downloaded at least one. After all when somebody does blow up big everybody wants to go back and dig up their old shit to see how it compares, which is why every bio piece on Dr. Dre

includes a reference to the World Class Wreckin Cru

. Technology also means nothing is ever lost or forgotten any more for better or for worse. For aspiring producers that means whatever beat tape you distribute better be the best shit you have - no bullshit you whipped up in five minutes with FL Studio. That shit's gonna come back to haunt you. It also means you may want to go official. Get familiar with an up-and-coming artist or label, put in the work, then when they blow up you do too. At that point you can shop your shit around, put out your own album of music, or both.

According to their press kit that's just what Circle Research (the somewhat anonymously named duo of Nik and Gil) have been doing dating all the way back to the 1990's. Their track record in that time hasn't gone unnoticed as we covered their "Mulligan Stew" album in 2004, although that release included a selection of their favorite regional lyricists rapping to their beats. The irony is that their bio makes their resume sound LESS impressive than it actually is, referring instead to work for obscure artists readers of this review likely won't know - Ivana Santilli, Elizabeth Shepherd, The Framework and iNSiDEaMiND among others. Worse yet the bio downgrades them another notch by referring to the popularity of their "unofficial remix work for international artists," implying they're good enough to twist a k-os song but not good enough to actually create a beat for him in person. If I was Nik or Gil I would request a rewrite.

Unfortunately some of the beats on "Gardiner Express" raise doubts about how much esteem one should hold their work in. No doubt they've been critically acclaimed before and will be again, but even the best songs on this beat tape are directly derivative of other more famous beats. To their credit Nik and Gil aren't trying to hide this fact - you can guess that "Got Your Money" will be a revision of Ol' Dirty Bastard & Kelis before you even hear it. The problem is listening to Circle Research cover/modify it doesn't impress me - it makes me want to hear the original Neptunes beat instead. "Gummy Worm" too makes me want to listen to Ohio Players' "Funky Worm" instead, or at least a song which sampled it better (R.I.P. MC Breed).

The less obvious bites are more interesting but also among the shortest beats on the album - such as the 1:33 long track "El Guapo's Revenge." I suspect that's not a Bas Rutten reference - more likely it refers to the Spanish guitar music interspersed into the electronic beats. Also recommended: "Caveat Emptor" (no joke) at 1:29 in length, and the fairly accurately named "Hot, Hot Shit" at 2:31. It's not hard to see how comparisons to J Dilla would be apt in this case - his beat tapes often contained short ideas good enough to become full-fledged songs. "Gardiner Express" can be enjoyed as instrumentals, but with Dilla tapes you could feel his personality even without any rapper on the beat. This album does have moments of greatness but in the end I just can't say the same for this anonymous duo.