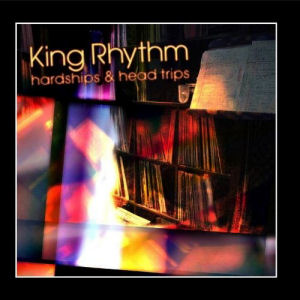 What is rhythm? It's a word that's ingrained in our vernacular, but what does it really mean? In musical terms, rhythm is defined as the pattern of regular or irregular pulses caused by music by the occurrence of strong and weak melodic and harmonic beats. By this definition, just about everything has a rhythm to it, even when some would argue otherwise. Here we have Baltimore, MD native, King Rhythm, who seeks to continue creating his own unique form of hip-hop. His music is built on a foundation of dirty beats that are hard, funky and aggressive. Previous releases were focused on electric and dance sounds, but with the release of "Hardships & Head Trips", the synths have been replaced with guitars and drones to create some progressive hip-hop that is almost psychedelic in nature.

The album kicks off with the two-in-one set of songs "No Magic/Bangin' Tha Wall". The drum stays constant through both songs, but the second half becomes increasingly psychedelic, reminiscent of some of the work of Funkadelic. Like its name would suggest, "The Machinist" has a very industrial sound to it. The drones almost sound like metal striking against metal. The beat cuts out with about thirty seconds left on the track. King is trying to get someone to "say something" but he seems to be confused about what it is that King wants them to do. He eventually ends up proclaiming that "it's hard to talk to a machine". K-The-I??? is featured on "In Operation", and the track starts with some classical piano strings before the drums kicks in and make it one of the album's highlights. The hook questions the listener, "what will be the answer, to the cancer?"

The album starts heading towards the end with "Future Museum" and "Mad & Hating". The latter is one of the album's simplest songs, but it is that simpleness that makes it one of the album's more accessible tracks. Boom-bap beats and guitar riffs make up the rather catchy production. The instrumental track "Current Floor aka Kid Do The Brick" brings the album to its final stop. On a whole, the sounds here are an acquired taste. I doubt that with this release King Rhythm will be reeling in hordes of new fans. But for those familiar with his work and look forward to his releases, this should hold them over for awhile. While it doesn't fall within the comfort zone of something immediately identifiable, "Hardships & Head Trips" manages to carve its own spot, and in that spot, Rhythm is King.