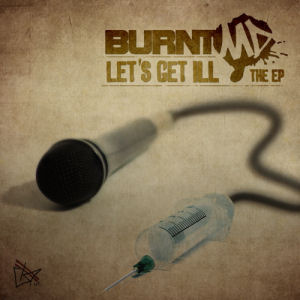 RR's history with BURNTmd goes back to January 2009, when he sent us the track "Microphone Doctor" hoping to get a spin on the Hip-Hop Shop podcast. The implied EPMD reference and bugged out beat punctuated by gunshots got my attention, so the new era hip-hop MD got his degree on our show. Since concluding BURNT had a lot of potential we've featured his tracks regularly, including most recently the title track of this album "Let's Get Ill" featuring Copywrite, Phil Da Agony and Reks. Although we respect the "Brooklyn made, Vermont raised" rapper for his ability to pull big name guests from the underground (more on that in a minute) it's really on his solo songs like "Rap City" that the gruff voiced MC shines the brightest:

"Capacity is overloaded, overflowin with radio waves
and stereo players and shows kid
DJ's play what they know is, ser-ious-ally ill
Lyrical-ly killin at will, stealin my mills
Grillin my gills, swimmin through motherfuckers
I'm like a shark, alpha male, with or without a deal
I'm verbally gifted, servin herbs that get lifted in verbs
I slur cause my journal is dusted
Don't believe in what you readin, but when you listen to me trust it
I'm BURNT, now you toasted and buttered"

Harp melodies are used far too rarely in hip-hop, and the dusted sounding and aptly named BURNT blesses the beat nicely. BURNT describes his style as "lyrical Chuck Norris with Berry Gordy" and since none of us has heard either one rap we'll have to take his word for it. If put on the spot to pin down his style a better comparison would be Non Phixion meets Big B. He's unapologetic about his dusted, gravelly delivery and deadly serious about his craft, although occasionally his ambition exceeds his reach as he tries to cram too much into a bar and his flow spills all over the beat. His vocal tone also requires a more careful tweak in the mixdown as a strong melody and beat tend to overpower his verbals and make it harder to pick up his punchlines.

Fortunately for those times when you might get burnt out on BURNTmd on "Let's Get Ill," the NY to VT rapper has an uncanny ability to recruit from the best independent rappers out there to join him on beats. Akrobatik jumps into the mix on the stormy "Stand the Rain," Copywrite blesses the piano banger "ILLWORDS" (the album's best track) and "Stand Back" has an all-star roster including Krondon, Phil Da Agony and Planet Asia. With so many connections on his album, any weaknesses in BURNT's style tend to be smoothed out (the less generous would say covered up) and the overall quality of "Let's Get Ill" brought up. To be fair though it's not that BURNT is a poor lyricist - he certainly wouldn't have been featured regularly on Hip-Hop Shop if he was a garbage rapper. It's just that the producers who work with BURNT need to learn how to use his unique vocal tone to maximum effect, and BURNT himself needs to pull his rhymes back a bit to make everything he wants to say fit. The ultimate conclusion is the same one as before - BURNTmd has a lot of potential.