Brawdcast :: The Quest for Human Completion 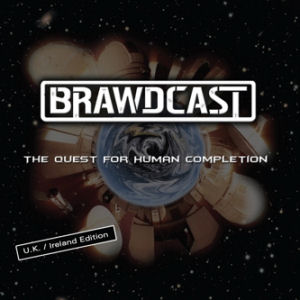 This is the second album from Orange County rapper Brawdcast, following his 2006 debut "Suburban Spokesman."  He won "Best Hip Hip Artist" in the Orange County Music Awards in 2006, 2007, and 2008, which says at least something about his skills on the mic. "The Quest for Human Completion" is his second album, on UK label Psychonavigation Records. It's interesting that an obscure O.C. rapper got hooked up with an obscure Irish ambient electronica label, but there you have it.

Brawdcast spits quick verses loaded with one-liners and focusing on positivity. As his debut album makes clear, he's suburban and proud, and doesn't pretend to be street. Instead, he raps about his search for spirituality and his relationship with God. Brawdcast did missionary work when he was younger, and while he's struggled with his vices and shortcomings in recent years, he's looking to reconnect with his faith. His lyrics deal with his struggles to be righteous, and he owns up to his human failings. Unfortunately, his good intentions don't make up for his pedestrian rhymes. On "Not Today" he raps:

His delivery needs work as well. Too often he sounds whiney, which lessens the impact of the message he wants to get across. He gets help on the mic from LMNO, NeeZee, Hochii, Sophistic, Destruct, Mic Moses, and C4mula. They add some variety to the proceedings, but for the most part, this is Brawdcast's show.

The beats are supplied by Freddie Joachim, Prime Music, the Optimist, Soul Mechanix, Discreet Merchants, Goblin, Cali Brown, Scum Baggins, Ariano, and DANEJA. They are soulful, a little jazzy, and along the lines of other positive SoCal hip hop. Highlights include the blunted head-nod of "Good Intentions," the soulful strings of "Life Ain't Easy," and the laid back grooves of "Wild At Heart." Brawdcast also brings some heat, like on the bouncing funk of "3 Amigos,"  and the boom bap of "That's Alright." With a better rapper, these beats could shine, but Brawdcast frankly doesn't do them justice.

"The Quest for Human Completion" might be of interest to fans of SoCal hip hop like Freestyle Fellowship and Jurassic 5, and people looking for a hip hop with a Christian focus should cop this. Brawdcast makes positive, old-school leaning hip hop that may set the O.C. on fire, but doesn't do much to move this reviewer.