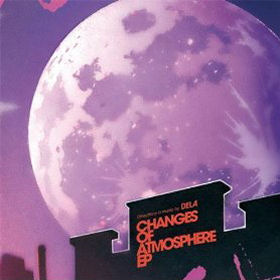 What does it take for a French artist to win over hip hop's best and brightest? Well, I can't say for sure, but logic tells me that anyone from the land of croissants, berets, and escargot would have to be pretty darn good to earn cosigns from the street-conscious stateside rappers. In the past, artists who made the jump from French to American audiences did so by bypassing the street readiness of most mainstream hip hop and focusing on more mature, tasteful elements and jazz and soul orientations. In the ‘90s, MC Solaar gained a North American following after his appearances on Guru's "Jazzmatazz," and bilingual rapper Lucien turned heads with his appearances on albums by alternative-minded acts such as Jungle Brothers and the Beatnuts. More recently, the production trio Jazz Liberatorz found acclaim for their heavily jazz-influenced albums which enlisted the talents of veteran underground favorites such as J-Live, Mos Def, Sadat X, and the Pharcyde.

Parisian producer Dela cites A Tribe Called Quest and the RZA as his earliest influences and has been producing since his early teenage years. A multi-instrumentalist, he first made waves in 2007 with both volumes of his "Atmosphere Airlines" series which featured such respected names as Large Professor and Talib Kweli. He uses both an MPC and a more traditional SP drum machine for his tracks. His official debut "Changes of Atmosphere" arrived early in 2009 with guests from a wide range of celebrated MCs including Blu and Naledge.

One would never know Dela was foreign based on "Changes of Atmosphere," so listeners wary of European hip hop should not be turned off by the producer's origin—the music has a universal vibe that defies any regional characterization. The album as a whole reminds me most of DJ Jazzy Jeff's recent work on "Return of the Magnificent" with its smooth, soulful basslines, jazzy instrumentals and samples, crisp, clean polish, and wide-eyed, poetically minded rappers. His best beats attain sonic beauty through perfect balance and inspired arrangement, and many resemble expansive soundscapes with lush orchestration. The Queens Connex and Termanology feature "Stress" sounds like a cut straight off his self-professed favorite album "Midnight Marauders," and the Q-Tip sample only enhances the likeness. Listeners might be familiar with the rich flute sample on J-Live's "I Say Peace"—I recognized it from Ras Kass and Coolio's 1995 duet "Drama"—but Dela engineers it at a speed such that it emits an organic expressiveness I had not heard before. Even the interludes are phenomenal, such as the minute-and-a-half-long "Won't Do" featuring the airy vocals of Miles Bonny and a fluttery trumpet arrangement.

The precision that Dela puts into each of his beats is remarkable, and I can't imagine one listening through the LP without coming to the conclusion that this guy is one immensely talented dude. The quality of the beats only seems to enhance the energy of his talented guests, who really come through for Dela. J. Sands' exuberant verses on "Live the Life" take the listener on a geographic journey, while Elzhi's tale of brotherly love on the nod-inducing "My Nigga" shows a level of personal nostalgia I hadn't heard from him before. Best of all is Talib Kweli, who shines with his inspired introspection on "Long Life" yet still doesn't steal the show from Dela's magnificent sax line.

"Changes of Atmosphere" is quite consistent, and the feel-good vibes continue through the second half, coaxing contemplative reminiscence from Reach on his horn-laden number "How to Fish," a dedication to his deceased grandfather with a simple hook: "My grandfather never bought a lot of gifts / But he gave me a rod and he taught me how to fish." Dynas brings some social consciousness to the table on "The Plan" which questions political policy across the globe. Dela flexes his versatility with excellent piano cadences on "The Plan" and "Chill," which given Large Professor's cautionary tale of drug sales could just as easily have been a cut from "Breaking Atoms."

2009 saw a surprising volume of excellent underground releases slip completely under the radar. Dela's debut is a special combination of phenomenal beats and unusually strong performances from his guests, and the material here alone makes him a producer who needs to be on your radar. With warm weather on its way, chances are you'll need some smooth music to cool off to, which among myriad other reasons is why "Changes of Atmosphere" is worth your checking out.