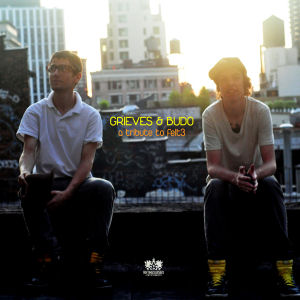 "Felt 3" was hands down one of the most important rap albums released in 2009. The perfect balance struck by Slug and MURS lyrically was ideally matched by production from Aesop Rock, creating a sonic masterpiece that will only improve as it ages. It seems Rhymesayers affiliates Grieves and Budo feel the same way, as they decided to pay tribute to this landmark tribute to Rosie Perez by taking some freely available acapellas and giving their own interpretations on the original versions. Reframing a classic used to be an act that took decades, but in our high speed digital times it makes sense for G&B to come back and do it only six months after the original. There's no reason not to check it out - after all it's FREE.

"Bass For Your Truck" is the first track to get the G&B touch, and while I'd be hard pressed to say you could improve a song I originally wrote "sound(s) better the more you crank it," I can't complain about their take on the instrumental. Aesop's version is ambient, echoing, and a little bit eerie. G&B make it more electronic and the bass if anything it just a tad bit heavier. It's similar to what happened when the already slamming "Jeep Ass Nigga" by Masta Ace was transformed into the bass vibrating "Born to Roll," although the effect there was more dramatic due to a tempo change - here it stays the same as the original and remix are both about 3:20 in length.

"Like You" also maintains the same length and tempo, but G&B's revision is even more noticeable here. The original was fairly minimalistic in presentation, bringing the narcoleptic and slightly depressed delivery of Slug and MURS to the forefront. G&B flip the script and make it much more upbeat, happy-go-lucky and musical - a fun and bouncy song which had previously seemed almost dour. It's remarkable considering nothing about the lyrics has been changed whatsoever.

Not every revision is a success. "Felt Chewed Up" was a gritty bruising attack on the audio canals punctuated by the matter of fact refrain "F-E-L-T, FELT FELT FELT" - a declaration of "real rap, raw beats, that bang in y'all streets." G&B soften it up far too much in the verses, then try to overload it in the chorus, and miss on both marks. "Protagonist" becomes an outer space trippy pop tune where it originally been the album's opening track, a chunky and funky rap from "your favorite group that wasn't even a group" that set the tone for the entire CD and was anthemic in its declaration that Felt is "everything you love about rap in one disc." G&B lose that cutting edge while trying to respect it.

Grieves and Budo close out better with their take on "Glory Burning," and overall can't be said to have ruined anything MURS and Slug originally did by giving it an alternate sound. It's well and good to be fair but it also serves the reader to note that if you put the same five songs on this EP next to their contemporaries on the original release, you'd prefer the Aesop Rock version in almost every case. Then again it would have been exceedingly difficult for ANY artist to top what was almost a flawless classic, so you can respect the moxie of G&B for trying in the first place.