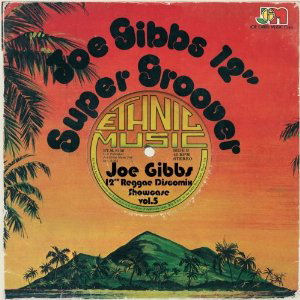 Picking up right where "Discomix Showcase Vol. 4" left off, this latest VP Records compilation continues to showcase the career of Jamaican production legend Joe Gibbs. In his era Gibbs was the Pete Rose of the reggae scene - no matter what the situation he always seemed to come up with a hit. That lends itself to two good reasons to check out a Joe Gibbs compilation - the quality of the songs presented and the diversity of artists that he worked with.

While "Volume 4" did indeed reflect a reggae spin on 1970's disco music, the term "discomix" is a little more abstract on "Volume 5." That's to be expected given the songs collected on this edition range from 1980-1982, coming at a point after the world had declared "DISCO IS DEAD" in the summer of '79. One should take the term then as a declaration of what the selector (what Americans think of as the deejay) would play at the discotheque hence his "discomix" of music. While a comprehensive discomix from this era in reggae would also include songs NOT produced by Joe Gibbs, it's fair to say the diversity of artists he worked with and number of hits he had a hand in meant several or many songs played on any given night at the local reggae club would have his name on the label.

The vibes this time around reflect a strong diversity of sound. "Ring Craft/Dreader Mafia" by Earth & Stone w/ Snuffy & Wally is sung with a minimal amount of patois, and although the tempo and piano backdrop reflect island culture it seems meant to crossover to a U.S. audience. The Carol Gonzales and Paddy Roots collaboration "Sweet Sensation" is as close to stereotypical "disco" as anything found here, which was perhaps unfortunate for the song by 1981. In retrospect the track works though a similarity to the vocal stylings to Sade and Patti LaBelle can be heard over the electronic notes before Paddy uses his chattah to bring things back into the reggae fold. "Dreadlocks Girl/She Loves Me So" goes to the opposite extreme of "Ring Craft" in being a pure island melody, unapologetically mellow in its melody and percussion, as Sammy Dread and Tappa Zukie take their sweet time busting out a slowly crooned and heavily Carribean accented groove.

As before the songs on "Discomix Vol. 5" aren't for the impatient, as only two songs on this compilation are under six minutes long. To get into the sound of Joe Gibbs you need the time to sit back and unwind, but you are rewarded for the effort by songs like Junior Murvin & Trinity's "Time Stiff/Time So Rough." The falsetto singing could be comical done incorrectly, but the sentiments "this is a ci-ty, without pi-ty" give the presentation a much needed balance and echo the pioneering work Curtis Mayfield did on "Superfly." Gibbs gentle hand in the studio guided this song correctly, and the same can be said for the majority of this album. While I personally prefer "Volume 4" a bit more overall, reggae fans who enjoyed the previous volume will undoubtedly want to check this out too.