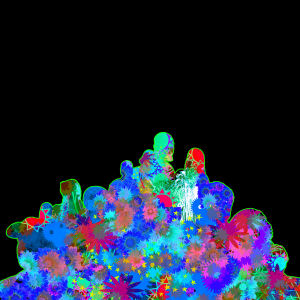 Black Hole Sun, won't you come, Dark Time Sunshine, won't you rhyme. Contradictory concepts inform both titles. A black hole is a COLLAPSED star, with a pull so deep and strong not even light can escape from it. Similarly there could be no sunshine during a dark time, because darkness is by its very nature the absence of ALL light whether solar or artificial. It's a bit mindbending to accept these contradictions in a musical construct, but that's exactly what the artists of the Fake Four roster are going for. This is not some fun loving dance music, this is not nihilistic gangster rap, and this is certainly not some Benjamin flashing ice grilling posture of wealth.

The difficulty of Dark Time Sunshine is that it's much easier to define what they AREN'T than to explain what they ARE. Even their bio obscures their origins, calling them "two loggers from Northern Ireland" in one paragraph and "from Seattle U.S.A. and Chicago Illinois" in another. Well I can safely say there's no Irish brogue to their raps, so I accept the latter description as the more accurate one. On one hand they brag about touring with and/or opening for some of hip-hop's best acts - Del the Funky Homosapien, Jedi Mind Tricks and Sage Francis - and on the other they trip out like Tame One on acid tabs and brag their music "makes you feel as if time travel is surely possible with every listen." Well they don't have to try too hard to convince me of the latter, I've been watching Doctor Who for over 25 years, so what I really need to feel is whether Dark Time Sunshine can pour all these disparate elements into one "Vessel" and still have it hold together. "Return of the Agenda" is a good place to start:

"Snob in fact rap, cataclysmic perhaps
Nay naps, never sleep, indulgin dark racing packs
Elapsed time stretch, alien opera ock
To break and shatter all glass jaws and stays raw
Daddy came with the jigsaw, mad CC
Cake goin out the streets, servin these dopefiends (chlorine)
Morphing these plans to form more fiends
Standing outside of my premises, ajar, corpse team
Haven't slept in a week I wait for the DTS
But they've encountered more vivid dreams than where they slept
DM the chemical released with every listen
The spit is paramount zenith of cult fact, religion
A way of life, precision..."

Twisted? Yes. It makes slightly more sense than a Dr. Octagon flow, but a lot less than an El-Producto one. The second verse of the song opens with a question that is in itself a statement and a challenge: "After further and extensive research, why settle?" Why indeed. This heady rap could overwhelm most listeners, but thanks to an instrumental that relies heavily on cymbal, snare and a plucky bass the over-the-top chemically altered flowers on the beat (including the above quoted guest Ninjaface) hold it together long enough to "return to the immaculate conception" in hip-hop. If Dark Time Sunshine weren't signed to Fake Four they'd be signed to Definitive Jux, because on either roster their penchant for pushing rap to the next level while being musically and lyrically experimental would be a perfect match.

DTS have a lot of friends they invite to join them on "Vessel," which makes it even harder to nail down what exactly Ludwig and Lair are on. When you share the lineup with the likes of Aesop Rock, Peegee 13 and P.O.S. on "Primor" you get lost in the mix, although happily so given the talent level and layered sounds of tambourine and bassline punctuated by the occasional vocal YELP. Despite being so unconventional otherwise, the song actually has a traditional construction of lyricists spitting bars with verses separated by an instrumental break (and/or some DJ Zone scratching) that functions as a pseudo-chorus. If you peel back the layers you find a lot of traditional hip-hop at the core of this onion. Songs like "Instructions to Numb" featuring Soliloquists of Sound, Xperience and Qwel or "Defender" featuring Reva Devito have a boom bap hardcore rap sensibility that traditionalists to the core can relate to and enjoy.

In conclusion it's fairly evident that Dark Time Sunshine are on some next shit with "Vessel," but they're not so far gone that most listeners can't feel their flow and enjoy the presentation. I qualify that with MOST because this album is clearly aimed at a subgenre of hip-hop appreciation largely comprised by fans of the very people they brought on this album as guest stars. In other words - if you like Aesop Rock, P.O.S. or Qwel then this album should be right up your alley. If that's not the case then the Sunshine may not penetrate your Dark Time, but the album is definitely not the whack - just a little bit too bugged out for some heads who aren't chemically prepared for the experience.