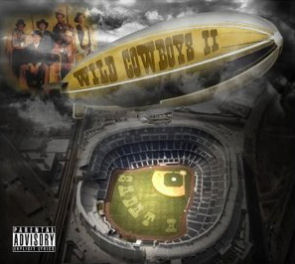 Oh no he didn't. Tell me Sadat X didn't jump on the sequel bandwagon just to peddle his most recent recordings to his few faithfuls, rushed it out to a willing manufacturer who put out a horribly mastered product that in no way can compare to "Wild Cowboys." The first impression and subsequent listens suggest he did. For the promisingly titled opener "Return of the Bang Bang" he teams up with "Generation X" collaborator Will Tell (of Brooklyn Academy) for a dub-inspired caper that incorporates non-rap quotes in clever fashion. But despite the interesting set-up the track is simply unlistenable due to the bad sound quality.

Things improve only slightly for track number two, the Pete Rock-produced "Turn it Up," a song apparently recorded this year. But again the flimsy sound turns it into a gross misrepresentation of the rapper's and the producer's talents. And this with the former proclaiming, "I'm not the nigga to put his name to just anything," and the latter declaring, "The Chocolate Boy Wonder help Dat X swim, can't let him go under"...

The next victim is Diamond D, who turns in an interesting, tribal, James Brown-sampling beat for "In Da Jungle." Will Tell returns with the dancehall thump of "Nuclear Bomb" as X gets exceptionally cocky, peaking in the line "A king don't bow, he don't even know how." The first explicit mention of the cowboy theme (through an uncredited hook) comes on "Still on Deck," another awfully sounding production, this time from DJ Spinna.

To fast forward to the decent sounding tracks, "Pray" features conscious verses from Kurupt, M-1 and dead prez affiliate Umi over a Sir Jinx beat. This of all combinations actually works thanks to the soulful and spiritual production and the fittingly thoughtful deliveries. "Long Years" re-unites Brand Nubian to a conciliatory Buckwild beat that samples Nas extensively, the only off element being Lord Jamar's moody lilt. Thanos' "Bargain With the Devil" is the most advanced production here, a slowly rattling rhythm section alternating with symphonic '70s funk rock elements. Guest Vast Aire makes himself seem like the only logical sparring partner of Sadat on this adventurous track. Another okay effort comes with the unimaginatively titled "X and Bill" (as in Ill Bill), where 9th Wonder supplies the New Yorkers with vintage low-hitting boom bap fare. At least in theory Nick Wiz should get some props as well for the underworld groove of "Wherever."

To be clear, not a single track on "Wild Cowboys II" lives up to the sound standards set in the past thirty of recorded rap music. But the handful mentioned above can be tweaked with volume, bass, and treble. Others remain bad no matter what, and in some cases the most professional mastering couldn't turn this shit into gold. Grant Parks' beat for the Rhymefest duet "Roll That" is annoyingly simplistic, while the rappers follow suit. "Swerv" is a guest spot by someone X refers to as "my son Swerv" twice, adding a little extra confusion to a track you'd like to forget about as soon as possible. Dub Sonata serves up a daring but incredibly disjointed track for "Knock Me Down." And '90s hopeful Minnesota supplies the background to the abysmal Money Boss Players feature "Everybody Know."

The only track that revisits the Wild Cowboys theme with a modicum of success is "We Kewl," because it features Shawn Black and X celebrates the reunion with the lines "Wild Cowboys is back again / I done found my dude Black again / like I was searchin' for dinosaur bones / I thought he wasn't fuckin' with microphones no more." Riding a familiar sample, it's at least better than the closer with the same line-up, "Last Time Out," a clunky affair you wouldn't want to bother the MySpace community with.

Does it really come as a surprise at this point that this throwaway release offers next to nothing in the lyrical department? "Wild Cowboys II" actually makes me wish I gave Kurious a higher rating for last year's "II," that's how far apart these releases are. Fool me once... Until now I couldn't complain about being fooled by Sadat X as I've always enjoyed the output of one of rap's most original cats. But next time I see a CD from one Derek Murphy, I will be extra cautious.