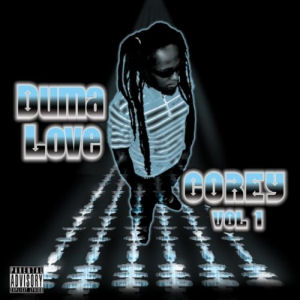 While Duma Love is a new name on this website, he's not without some credentials and accomplishments before we spill a single drop of digital ink on his behalf. For those who remember the J-pop group Cibo Matto, signed to Warner Bros. Records and closely affiliated with the Beastie Boys imprint Grand Royal, Duma Love was their "go to" man. Duma was their percussionist, beatbox, worked the turntables and in general filled in on any part they didn't have a musician for. In this role he appeared twice on the David Letterman show, recorded music with the Beastie Boys, and went all around the globe and back again. Cibo Matto broke up in 2001 to pursue solo projects, and although it's not surprising that Duma Love would eventually be the next branch off that tree to grow into a full album.

It's tempting to say "Corey Vol. 1" is a long-anticipated album, but nine years is an awfully long time to anticipate one lone member of a defunct band, and in the dog years of hip-hop that's AARP senior discount time. Given it's also realistic to say that despite their Beastie Boys affiliation, Cibo Matto's J-pop was not every hip-hop head's cup of tea, it's possible that his name is so far underground listeners need a floating derrick and a drill to bubble him up to the surface. Therefore let's put his affiliations and credentials aside and put Duma Love into a 2010 perspective - he's most likely all brand new to you the reader. This is not a re-introduction, this is an introduction plain and simple. As introductions go "Corey Vol. 1" is a very ECLECTIC mix. It's both a compliment and a critique to say that it's not exactly clear what Duma Love wants to be. "Stick Up Boys" finds Love spitting over the kind of tinkling melody and harmony Talib Kweli would be at home with, narrating an unapologetic look at his New Jersey life growing up. "Boys in Blue" has that perspective too, but here Duma Love opts for a more Saul Williams delivery. It's listed as a skit but it's definitely spoken word poetry:

When Love professes "you see me in the club, it might sound bizarre" on "Get Over Here" that's certainly the truth. The beat's all techno-futuristic, his delivery changes up to high pitched and squeaky, and listeners will think they threw a Kool Keith record in the mix by mistake. "Do My Love" finds DL flowing to some deep and syrupy funk, changing from a lyrical flow to a sing-song spit to a T-Pain style AutoTune from one moment to the next. Perhaps the most traditional and easily accessible song for his potential hip-hop audience is "Got it Poppin," with a synchronized chorus and synth whine backdrop reminiscent of early 1990's West coast rap, and Love's tightest rhymes of the entire disc:

In the end it's hard to know what to make of Duma Love. His background and experience suggest he's got the chops to put together a great album, but his lack of focus and sometimes marginal beats betray that experience and hold him back a bit. The promise and the potential on "Corey Vol. 1" are definitely there though, and we are informed that "Corey Vol. 2" is already recorded and on the way with "more examples of his musicianship." Musicianship? That implies another eclectic album when what listeners will really want from DL is to pick one style and go the length. He could be as profound as Amiri Baraka, as powerful as Mos Def, or as slick as ?uestlove if he could abandon being all things to everybody and do one thing really well. Duma Love delivers more potential than product on this first volume but since it won't be another nine years until his second solo album there are undoubtedly greater things on the horizon for him in the future.