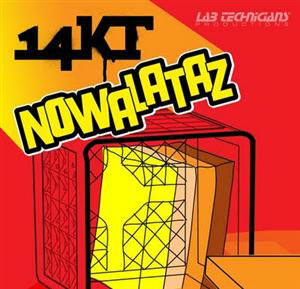 Producer 14KT would like the following stated for the record: "(Nowalataz) started when James Yancey a.k.a. J Dilla passed in February 2006. To cope with the death of my favorite producer, who I liked to call my unofficial musical mentor, I started making Donuts... uncontrollably. I never planned to release any of the material out of respect for Dilla & his craft. I've shared some of the music with others, they would repeatedly ask me to hear it, so I decided to put a little something together and make it official JUST FOR Y'ALL."

There you have it - "Nowalataz" is a 17 song ode to 14KT's favorite deceased producer. This all-instrumental album is entirely free thanks to A-Side Worldwide and represents a post-mortem show of affection for a legend cut down in his prime. Some people could simply say they're paying tribute to Dilla and do whatever they liked, but artists like Dan-e-o and 14KT take it to another level by actually continuing the legacy he left behind. There's no question why 14KT says Dilla was his "unofficial musical mentor" when listening to "Nowalataz" - each song sounds like it could have come from Yancey's lab and might actually be undiscovered gems from one of his beat tapes.

Much like Dilla's "Donuts" each track is a very short but incredibly well crafted sugary treat of a beat, with only the album's finale "Black N Gold" clocking in at over three minutes. The patterns are as undeniable as they are enjoyable: the way 14KT stops, starts and stutters the staccato melody of "The Meaning," the friendly vibes that open and permeate "Hello" and are scratched back in just when you might forget the song's origin, the quiet storm meets hip-hop chop shop attack of "Cherish," some lovely "Sweet Tee Ish" that goes "on and on" and could have you sipping the flavor for days. Much like the album's title, 14KT feels these are songs you can savor, and thanks to the fact they are both free and a worthy tribute to the man he considers his inspiration, I'd have to agree. Pass the dish of candy but don't just take one piece - grab all the flavors you can and dig the solid gold man.