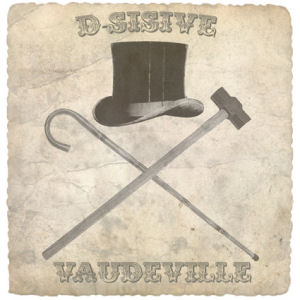 D-Sisive has been on such a remarkable run that it can't be a coincidence any more. While it's conceivable that one individual writer might have a vested interest in a particular artist or group and thus overrate their work (something we try hard to discourage) there's no accounting for the fact that three different writers on RR felt so strongly about D-Sisive's work they gave his album 9 out of 10. For those new to the website, that's putting Derek Christoff in a very elite musical and lyrical category - right up there with the likes of Aceyalone, Gift of Gab, Nas, The Roots, Sage Francis, et cetera. So if you're asking yourself "Why haven't I heard of D-Sisive before now?" reading this review I'll give you three answers:

1.) He's an underground rapper from Toronto, a scene that's STILL far too overlooked.
2.) He's signed to the ruggedly independent URBNET Records - a great label that's sadly not a major.
3.) Christoff put his D-Sisive career on hold for six years while dealing with the death of his parents.

There's no question that D-Sisive sounds depressed on "Percocet," but even through the pain he finds the time to parody Cypress Hill, complete with a scratched in sample of hip-hop's favorite potheads chanting "la la la la, LA LA LA LA." If it sounds like D-Sisive is one of those tormented geniuses who can't see the world through rose-colored glasses, trying to self-medicate just to keep his head on straight, you might be right. D can flip up a variety of lyrical styles when it comes to his delivery, but the one thing that always remains is a pervasive sense of dread about the world we live in. "Shotgun Wedding" is a speedy tempo rap with D declaring himself "a killer, a felon, a villain fillin your melon with villainous feelings to the brim." Fresh Kils and D-Disive's production switches to a beautiful self-produced mellow vibe on "Aeroplane" but despite the elegant beat D declares his work "same fuckin song - different words I guess." D gets as close as he can to upbeat on "Never Knew Me" as guests Leagues and Fathoms help him sing the hook, but even on the Gym Class Heroes style riff he dismisses those closest to him with the words "save your hellos and goodbye for the rest of my life." OUCH.

To bottom line it, D-Sisive wants us to be absolutely clear on "Vaudeville" that life isn't a bowl of fucking cherries. It's not that I was under any misguided illusions about the nature of reality in the first place, but it's actually quite remarkable how someone so dark and jaded can actually rise above depression and create musically intriguing beats paired with interesting introspective raps. I'm going to differ a bit from my colleagues though and not hand over the keys to the trophy case yet so he can claim rap's "Greatest of All Time" trophy and parade with it like the Stanley Cup. Yes D-Sisive is good at beats and rhymes, yes he manages to be dark without making it morbid or gross just for pure shock value (see Necro), yes he's clearly a step above his contemporaries on either side of the Maple Leaf divide - but I'm still left wanting more. There are times "Vaudeville" borders on cliche - the over-exaggerated piano backdrop of "Liberace," the light bop and high keys of his break from darkness titled "I Love a Girl," and so on. If D-Sisive is as clever as I think, he's as good as he's been billed up to now, and yet capable of so much more.