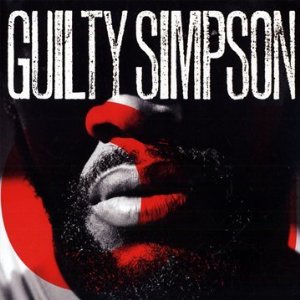 I first saw Guilty Simpson about four years ago at a Stones Throw show, opening for Madlib. That show, along with his verses on "Watch Your Step" off of Percee P's "Perseverance," and "Take Notice" on Dilla's "Ruff Draft," made Guilty seem like the next big thing: a rapper who could be grimy as hell and still hang with the backpack crowd. Guilty was a Dilla protege, and  Dilla was supposed to be handling production on Guilty's debut. Then Dilla died,  and by the time "Ode to the Ghetto" appeared in March of 2008, there were hardly any Dilla joints on it.

Having Madlib, Black Milk, and Oh No pick up the slack was a nice consolation prize. While I enjoyed "Ode to the Ghetto", I respectfully disagree with this website's perfect rating of that album. It's a good album, but Guilty's rhyming sometimes resorted to gangster rap cliches, and I had trouble understanding what songs like "Getting Riches/Getting Bitches" were supposed to be the antidote for. Did we really need more thuggish gangsta rap? Aren't there about 100 street rap albums released each month that fill that niche? Rather than feeling like the Next Big Thing, "Ode to the Ghetto" was just more of the same.

I was hopeful when I learned that Madlib and Guilty were going to be collaborating on an album. Whatever his flaws, Guilty is still a solid rapper, and the combination of his straightforward gangsta rap over Madlib's wacked-out beats is brilliant. Madlib adds some variety and experimentation to Guilty's no-nonsense flow, and Guilty in turn grounds Madlib, keeping him from going off into the deep end. It's a perfect partnership, with one major problem: the skits.

I'm not a big skit person. Even skits that are funny get old the tenth time you hear them. They generally drag down an album, screwing up its momentum. That's especially the case with the skits on "O.J. Simpson." See, the collaboration between Madlib and Guilty goes beyond Madlib supplying the beats. He also does TWELVE skits on the album, which means that exactly half of the songs on "O.J. Simpson" are skits. You know it's bad when it starts off with a prelude and then an intro. You have to listen to two skits before you even get into the actual music. The skits are mostly made up of what appears to be Melvin Van Peebles routines set to music. Some of them are pretty funny, but not twelve, and not on repeated listens. Madlib got the mix right on the last Quasimoto album, mixing in a few soundbites in with the rest of the songs. On "O.J. Simpson, " it's total overload and would be a deal breaker except for the fact that you can delete his tracks from your playlist.

Let me be clear: Madlib's beats on this disc are top notch, and includes some of his better work. It's the skits that are half-assed, stoned experimentations that should have been left on the cutting room floor. Madlib is doing an album a month through his "Medicine Shop" series, along with a lot of other projects, and I'm sensing some fatigue. He'd be better off focusing on quality over quantity, waiting until he had something truly great to put out rather than selling all of his ideas at a premium.

Even with the skit overkill, "O.J. Simpson" is a great album. Guilty continues to come off like this generation's Ice Cube, an angry yet thoughtful rapper who can be surprisingly reflective underneath his tough exterior. "Cali Hills" is a nice recounting of his relationship with the late J Dilla. "Karma of a Kingpin" is about how he admired the gangsters in his Detroit neighborhood as a kid. "Back On the Road Again" is about the grind of touring, and the pressures it puts on his relationship. The centerpiece of the album is "Coroner's Music." I've been listening to it nonstop since it was released as a single at the beginning of the year, and I'm still not sick of it. Madlib delivers one of his nastiest, evilest beats, and Guilty is absolutely on fire:

"Coroners must love my shit for certain
I keep 'em working
[...]
In this rap tug-of-war I yank the cord and watch them fall down
My report is lethal
No equal
No survivors
No sequel
None compare
They crumble when the monster stares
I see through you
My heat do to you
What they shoulda did"

Guilty is joined by Strong Arm Steady on "Outside," (where he threatens "to turn your little house party into UFC"). and Frank on "Scratch Warning," but for the most part, this is Guilty's show. He's still not the most dexterous rapper, wielding his rhymes like blunt instruments. What he does offer is old-fashioned gangsta rap, hard as hell and with a sense of humor underneath all the posturing and scowling.

"O.J. Simpson" continues to deliver on the promise that Guilty Simpson showed on his early work, and sees him continuing to develop and hone his craft. Madlib's beats are an excellent foil to his rhymes, and the two compliment one another. The real weak point is Madlib's skits, which show that the Beatkonducta is overextended, and has lost the ability to self-edit. While I admire Madlib's work ethic, he should explore the less is more philosophy. In the meantime, "O.J. Simpson" is best enjoyed with the skits cut out of it.