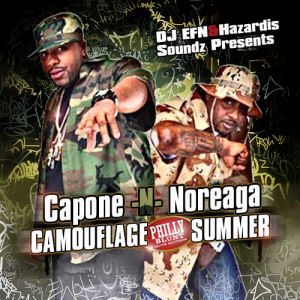 " is only a week away from hitting stores, but Capone-N-Norega are in no mood to wait. There's no reason they should either since between solo albums, prison terms and music label woes the dynamic New York duo have only had three new crew albums in the last 13 years (not counting their "Best Of" career retrospective). If you're releasing an album that's supposed to be a sequel to a hip-hop classic, you'd better crank the publicity volume WAY past 10 anyway. Hooking up with hip-hop magazine XXL to give away a free mixtape promoting the July 13th release date certainly turns things up a notch.

Much like the group themselves, this download is pretty hood. Song titles are in ALL CAPS like Daniel Dumile. If you put this one on your iPod you're going to have to fill in the artist name and album title yourself or you'll only find it on the "recently added" playlist. The artwork? Well obviously when you call your shit "Camouflage Summer" you've got to be dipped head to toe in military wears, and yet it still looks like someone did a poor Photoshop trace before cut and pasting their pics over a wall full of non-descript spraypaint tags. Okay so it's a free mixtape, CNN gets to skate on it, but if they do something this awful on "The War Report 2" they need to fire their graphic designer and whoever at IceH20 (their new label, run by Raekwon) approved the artwork. And as you might expect from a typical New York mixtape, there are a lot of songs jacking from other hip-hop classics. You get one guess where "Thugged Out Anthem" comes from - if you don't hear dogs barking then you guessed wrong.

Noreaga: "Aiyyo headed uptown, get the re-up on the arm
And then I shit on niggaz, diarrhea dot com
These niggaz is fuck boys, jail nigga suck boys
See me on my lazareth, Jesus was from Nazareth
Milltainment regime, they sound straight hazardous
Now these niggaz is scared, know that I'm mad at 'em
I had the Glacierz chick throw a maxi-pad at 'em
Cut 'em in your neck, stomp out your Adam's apple"

Capone: "Aiyyo the stove don't work, I can whip it on a hot plate
All I need is a little stinger, we can chop weight
Niggaz thinkin they fly, we throw 'em off the roof
Thugged Out, will light up your block like forty-deuce
We tie niggaz up and we divide bigger cuts
Russian torture style, put the pliers to your nuts (OW!)
'Pone I spit fire nigga, molotov cocktail
QB got more bars than a locked jail"

Well two things haven't changed about CNN over the years - Noreaga is still damn near retarded lyrically, but he's so over the top with it that his gross rhymes wind up endearing when paired with his deep vocal sound. 'Pone is still the higher pitched but more intelligent spitter of the two, and provides the perfect balance on tracks to make sure N.O.R.E. doesn't make their hardcore hip-hop too silly. Wait, who the heck is Glacierz though?

"Uhh, get richer, Rose mo' pisser
Pretty broad, let the whores lick her *MEOW*
I'm the hardest, you garbage, litter
Uhh, I blow stank like I'm rhymin out the shitter
Unruly, borderline type loony
Team Goonies, no not the movie!
Couture juicy bags, feet Gucci
Boy I been hot since I popped out the coochie"

Sorry to dispute you Glacierz, but you're not hot. I mean you might be hot as in good looking, I haven't seen a photo, but all your flow does is rip off the best parts of Foxy Brown and Lil' Kim. We've got enough hip-hop ripoffs of the two of them already in 2010, and since your name is not Nicki Minaj you can get to steppin - hit the back of the line miss. "Camouflage Summer" IS hot though, as the original material and guest stars make up for any occasional lyrical gaffes by Noreaga. The Hazardis Soundz produced "1st Degree Murder" lives up to his name with a menacing heavy bass, deadly pianos, and guest stars Fat Joe and Raekwon kill the beat. Kyze also likes the tinkle of the keys on "Fuck It" featuring Imam Thug, but there's nothing warm about the melody - it's unfiltered pure hatred straight out the tap. The underrated Scram Jones tickles ivories too for "Bodega Stories" but mixes it in an echo chamber, adds super crispy percussion, then brings in fellow New York favorites The LOX to spit their own bars on the track.

As for the recycled beats and freestyles over them, the results are hit and miss. Flowing to Biz Markie doesn't work for N.O.R.E. or Imam Thug on "Something For the Radio." On the other hand resurrecting D.O.C.'s "Funky Enough" is 100% on point, because the hard hitting and damn near evil bassline suits the hardcore gansterism of CNN perfectly. "Don't Look Any Further" falls somewhere in between with the Junior M.A.F.I.A. bite, and Capone popped me with the punchline "I smoke 'til my eyes lookin like I'm Pacquiao's cousin." On the whole there's no reason not to peep out the "Camouflage Summer Mixtape" as it's a nice little preview of "The War Report 2." To bite from Junior M.A.F.I.A. myself CNN can be as good as the best of them, while Noreaga can be as bad as the worst, but when he and Capone work together, you better move over.