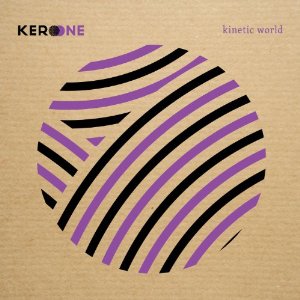 As self-produced underground rappers from California go, Kero One ranks at the top of most hip-hop lists with good reason. He got off to a well above average start on his first commercial album, 2006's "Windmills of the Soul," and subsequent follow up albums showed the "Early Believers" that they were right to hop on his bandwagon. His breezy style and infectious beats put him in the mix with veteran left coast artists like Hieroglyphics, Gift of Gab and Lyrics Born while simultaneously reinventing the potential of what hip-hop can be in ANY region of the United States. In 2010 Kero One should be considered a top dog but on "Kinetic World" he clearly feels he's still an underdog with much to prove. It's not accidental that his opening track is titled "Let Me Clarify" or that he feels the need to justify his spot in rap in his verses, because Kero is a book that has been judged by his cover once too often:

"They say K you slanted eyed, from around the Bay
Did your race rice spark as long bangs in your face?
Did you commit misdemeanors wit'cha disagreements?
Get all vehement and come out the mouth like bulimics?
I have my moments, but I tried so many different things
Good at most everything except listening
BMX'n, skateboardin with black and the white kids
Born a Pisces, license to put rap in a vice grip
Round the age of 14, I wrote my first sixteen
It was around 18 when I started beat makin
Deejayin, mixtapin, freestylin on stations
Sway gave my props to me, my first standing ovation
Adjacent, to raisin, my confidence, replacin
all those who said I couldn't rap cause I was Asian"

Even in 2010 there are detractors and doubters who think race has more to do with hip-hop than talent, ability and hard work. While Kero One doesn't go out of his way to put his face and image anywhere on or inside "Kinetic World," it's not hard to find him on a Google search and see exactly what he's talking about. Then again there's no reason he should make it a focus, because as he points out on "Let Me Clarify" it's other people who have needlessly tried to make it important in needless ways. Look at the hip-hop diaspora ranging from Eminem to Lyrics Born, from Plies to Pitbull, from Muphin to DJ Honda. Every race from every land has a hand in rap music these days. It would be a better world if Kero had no need to address his detractors in the first place, but now that he's clarified the issue and moved on, let's move on too. There's so much more to "Kinetic World" than such trifling concerns. The title track featuring fellow underground favorite Fashawn is a bombastic brassy banger over a big beat sure to bump in trunks coast to coast:

Fashawn: "A C-A state of mine every day I'm in
Before I start my day, I pray, say amen
In about every state in the U.S.A. got friends
Uhh, I keep it movin nigga, K.I.M.
Half a knot in my Aresu jeans, feelin fresh
As I roll through the ep, shit changed since I left
How you been? Maintainin in a daze I reflect
on the days movin trays makin my way through the 'jects
Yes! I'm back, made it 'cross the almanac
Canada to France, but I plans to hit Japan
Count some yen, couple grand, vacate, take the fam
Hit the water, touch the sand, pack my luggage then scram"

Guest stars are not the focus of "Kinetic World" but the ones that occur are certainly not unwelcome. The uptempo "We Stay Fly" bounces along with cameos by Dminor and Othello. The Tones join Kero One for "Time Moves Slowly" and while the track is an appropriate 5:13 long the smooth groove seems to go by far too fast. An all-star roster including Myk, Tablo and Dumbfoundead join Kero for the celebratory rap "Asian Kids," while Sam Ock provides a mellow croon in perfect keeping with the laid back plucky guitar strum of "On Bended Knee." Kero is just as good on his own though, giving us an amusing AutoTune/Kanye West impression on the hook of the college rap "My Devotion," or breezing over the cool out Cali cruising cut "Let's Ride," making you want to sing "la dah da da dah dahh" right along with the beat. He even dips into the deeply electronic (damn near chiptune) bass for "Remember All That" to close the disc, showing off his versatility as both rapper and producer for the whole album.

Now if I can offer one criticism of Kero One, albeit not a very harsh one, it's that Kero's topic matter rarely gets as provocative as it does on the opening track. He's not trying to start a revolution, nor is he trying to go down as an all-time great lyricist, nor does he have a bunch of "OH SNAP" punchlines that will wow you and your friends. Kero One is a good storyteller with a pleasant vocal tone and strong breath control, so even without profound topics or astounding concepts, you can't really hate on him for not advancing the craft of lyricism. "Kinetic World" is more about the vibe you get than the words you'll remember later on, and since none of the words are whack or obnoxiously bad anyway, it's okay to be "good to better than average" as a rapper given he can produce beats on his own better than most other rappers pay big money for. Haters move to the side, Kero One is here for the long haul.