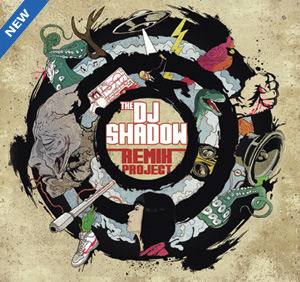 Joshua Paul Davis a/k/a DJ Shadow is one of the most respected yet enigmatic producers in music today. I almost wrote "in all of hip-hop" but confining Shadow to hip-hop alone seems far too limiting. Regardless hip-hop listeners were probably the first to celebrate his work, branding "Entroducing..." a classic from the moment it was released. Shadow created an instrumental album constructed entirely from samples at a point when hip-hop sampling had been stifled in the 1990's by an onslaught of lawsuits and clearance fees. Some have argued that was for the best as some overused samples were stifling hip-hop creativity, but the chilling effect led many people to seek out or create their own music, leaving behind a format that should have been celebrated for revisiting, remixing and renewing pop culture for a new generation. Shadow's record epitomized all of the right reasons to sample, as he created a musical collage which was far greater in sound and scope than any single beat, noise or loop he could pluck out of the soundscape - making entirely original songs out of old ones.

The culture has at times either followed DJ Shadow's lead or eschewed his increasingly esoteric vision, which found the celebrated and creative artist willingly branding himself "The Outsider" in his own field. Despite that DJ Shadow has not forgotten his fans, in or outside of hip-hop, and he stays accessible in an increasingly digital age through DJShadow.com. You can buy records from any point in his catalogue through his online store, but there's one in particular you can ONLY get from him via the website. You won't find "The DJ Shadow Remix Project" at Best Buy, Target, Amazon.com or anywhere else. In fact technically you can't "buy" this album at all - for a limited time Shadow is including a copy of the album free with the purchase of any +other+ album in his store. The creation of the album itself was equally non-traditional, as Shadow's website solicited remixes of his mixes from the online community, and the best of the best were compiled into this single disc. Here's what Shadow had to say about it:

"I love this CD, more than I ever dreamed I would. I love the lo-fi basement aesthetic of economic's vision, the sophisticated sheen of Randomatik's "Scatterbrain" mix, the grit and swagger of Irn Mnky. In many cases, new life has been breathed into songs I had long-since resigned to the past, and made them fresh again. You WILL hear these mixes in future shows, and that's the strongest endorsement I can give as a DJ. From one artist to another, thank you for inspiring me."

Let me give this album a strong endorsement as well - it's worth buying any album on DJShadow.com just to get the disc. The packaging itself is impressive, visually representing the wild clip art collage approach Shadow has to music, seeming to spiral out of control while simultaneously holding back the forces of chaos. That contradictory conundrum suits the music well as you pull out the inner sleeve tucked into this package, which by itself would have seemed like a CD single but somehow seems like a clever way to protect the disc from slipping out and getting scratched during shipping. It's also an excuse for more artwork of course, as well as a chance for DJ Shadow to print the aforementioned mission statement on the jacket.

I can't say "Remix Project" is for everyone any more than I can say that of the original versions, because Shadow's always been a little out there. The remixers understand and embrace that outsiderness, so their visions don't bring him closer to the mainstream. In fact the Benjamin One Mix of "What Does Look Like Your Soul" is not likely to be heard on any FM +or+ XM station any time soon, unless they dedicate a whole night to outer space acid jazz trip-hop. The song changes tempo, direction, style and feel at unexpected moments and in a way that the unobservant might construe as random or meaningless. If you look at it like a painting though, every element found within has a place and a reason to be, and when observed as a whole "Your Soul" goes beyond random to sublime. Other songs are easier to grasp though - the funky bop of Sonotech's "Mongrel Meets His Maker" is East meets West in a techno foil wrapper, the Ruby My Dear Mix of "Building Steam With a Grain of Salt" sounds like the backdrop to your favorite modern day anime or RPG, and the Blank Image take on "Stem" is both beautiful and boisterous in its audio assault.

Several of the songs are remixed more than once, so you can compare the new takes against each other or against Shadow's original versions if you like. Whatever approach you take though let's bottom line this "Remix Project" - the disc itself is 17 tracks and over an hour of always funky and interesting interpretations of the Shadow library. If you were already a fan this would be right up your alley, and if someone played this for you at a night club and you weren't a fan you might go up and ask the DJ what he as playing. If you want "rap" in your hip-hop though sorry, this won't fit the bill. This isn't two turntables and a mic - it's more like a turntable, a MPC, several MacBooks, and hundreds of hours of editing. Like Shadow himself "DSRP" is enigmatic and funky, not always easy to understand, but for the right audience it will be breathtaking.