Plan B :: The Defamation of Strickland Banks 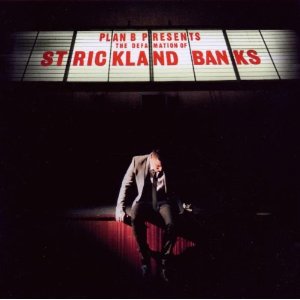 So Plan B, the erstwhile angry rapper turned pretty-boy soul singer, has released his sophomore album, "The Defamation of Strickland Banks." There are many interesting aspects to both the album and his own individual direction, one that has apparently taken a giant about turn. His is the story of a council-estate white boy from London that has, against all odds, made a successful transition from critically-acclaimed (but low-key) rapper to chart-topping soul sensation. There is just too much going on to ignore.

Having listened to the album extensively, it is most certainly impressive in numerous ways. There is excellent and soulful (meant in the old-school way) singing; plenty of Mark Ronson-esque throwback production; melodies aplenty; hit singles; a concept that actually makes a bit of sense… In fact, it is such a rich 50 minutes that I could almost keep going for another 10,000 words. But the main points to consider are the most subtle and obvious influences. For example, the whole "Ronson sound" which, unfortunately, means that Plan B either sounds like he is 3 years too late, or he has been directly influenced. Either way, he doesn't come off too well. Add to that the lack of variation – one man's consistency is another man's flatness – as everything sounds very similar from song to song. The first half of the album works remarkably well; the second, not so much. That he name-checks "Valerie" in the lead single "She Said" says it all.

The concept is admirable, and technically, yes – it works well. However, after "She Said" he gets locked up in jail and stays there for the rest of the album, and – spoiler alert! – there isn't even some sort of Shawshank twist, so it really starts to drag on. Again, this appears to be a direct descendant – The Streets album "A Grand Don't Come For Free" which, it must be said, is superior in execution and storyline. The album comes across as a touch indulgent at 13 tracks, too. As a side issue, have you heard of Mayer Hawthorne? Well, I'm quietly confident that Plan B has. That isn't to say that Ben Drew ripped anything off directly, but one can't help drawing comparisons between the two. White rappers turned throwback soul-singers; concept albums that sound uniform throughout; adopting personas and suits. Ok, I can only stretch so far, but there is a definite correlation.

Those points aside, there are many excellent songs, and even as some start to peter out, there is a musical twist or change that saves the day, so the marginally top-heavy first half is superb, not to mention dense. Yes, there is a formula but it is also one that demands an awful lot of thought and effort, so that it proves enjoyable is an outcome worth savouring. And even if the second half does drag on a bit conceptually, the music and melodies make it near-perfect background listening. Whilst a touch more variation would have helped – not some Neptunes blippy shit, but maybe a bit of ska? – at least "Strickland Banks" remains strong throughout.

But there is another thing that bugs me about Plan B. Yes, he has made the transition from angry, foul-mouthed rapper to soul singer. But in reality, there are very few points on the album at which I genuinely feel his pain, or believe that he is truly sharing his "soul" with us. It plays out more like a film script, and that could be fine – but then he starts rapping, and you instantly connect. The fundamental truth is that, right now at least, Plan B is (in a very subtle way) a far better MC than singer. Not in technical terms – like hitting the right notes – but in the way he ENGAGES with the music, and with us. Couple that with the fact that he doesn't rap nearly enough on the album, and the wheels could start to fall off – "The Defamation…" just about manages to make it through, however.

All in all, this is an album that merits multiple listens, and with a bit more careful pruning, could have become one of those "go to" albums that you're just happy to press play and zone out to. Close, but no cigar. Yet, amongst the density is a worthwhile and enjoyable LP that Plan B has poured his heart, soul (occasionally) and mind into, and this should be considered a success, if not an all-time classic. Whilst the ending may be somewhat unsatisfying, it sets up a potential sequel that could incorporate various guest-spots and even a Godfather 2 prequel element, so this could be the start of a fruitful saga.