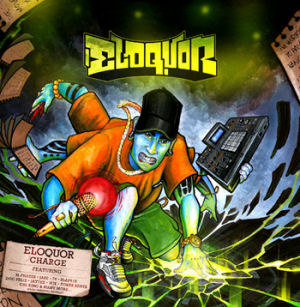 Readers who have been tuned into RapReviews lately may have noticed a wealth of praise for Australian rappers. Although some listeners still might scoff at seeing rappers from the land of koalas, kangaroos, and the Crocodile Hunter sharing a shelf with their thugged-out stateside contemporaries, a growing legion of MCs from down under have impressed our writers by embracing the creative spirit of underground rap and emphasizing lyrics and dope beats, often reminiscent of American classics of yesteryear. With many leading names still flying under the radar even in their homeland, their aim is for pure quality over mainstream sensibility, and to that end they have succeeded brilliantly.

Melbourne's Eloquor may be the latest to add to that list. With a heavy accent and versatile delivery, no one would mistake him for anything but an Australian, but his 2010 sophomore effort "Charge," distributed through celebrated Victoria-based label Obese Records, should appeal to listeners the world over. Undeniably hungry and impassioned on the mic, he enlists a roster of producers that will impress even those completely unfamiliar with Aussie hip hop including international favorites M-Phazes and Slimkat78 of the 1978ers. The beats are an immediate draw, with rich and appealing music throughout, in the words of the press release, "digging deep into the aural landscape of New York's hip hop roots." Exploring a range of tempos and moods, the sizable team of producers lends a consistent quality to Eloquor's tracks which results in some seriously dope songs.

That said, Eloquor's no slouch on the mic. He spits with a vengeance on the M-Phazes produced opener "Coming Up" and raps about overcoming struggle on the smooth "MT MF," a strong cut ripe with horns and scratches that likens life to ascending a mountain. The motivational sentiments continue on "Pressure's On," a tense number well arranged by Mr. Stone with ominous piano chimes and punchy horns. Eloquor recalls his own substance problems and explains how he used them to find inspiration. The reggae-tinged "Why" finds Eloquor and New York rapper Chi King on the socially conscious tip, enumerating societal ills on a bi-continental collaboration.

The standout is the Jase-produced "Keep On," a rousing and motivating gem on an album full of them. The lush, soulful production and Lauren Gillard's smooth, mournful vocals are a perfect match for Eloquor's inspirational verses and somber delivery. The chilling Slimkat78 production "Hey Folks" is equally stunning, a warning to young parents cautioning that their shortcomings may be reflected in their children:

"You may or may not know, but, me, I'm a teacher
The kids call me Donny, what up, it's nice to meet ya
Today's lesson, it's about youth and strife
And how they ended up on the outskirts of life
Now some got no mum, some got a dad
Whose hand they saw every time he got a little mad
Understand that we discipline our own kid, yeah
But to lay a boot to your boy who was dressed and
Ready for school but forgot to walk fast
So you kick him in the gut, then you lock him in the dark
That's fucked, and where's mommy to save the day
To take you away where kids and parents play
She's gone, bye-bye, now no more nap
She up and left ‘round the time you turned one
Was only seventeen, it was all too much
So you live with the venereal bloke that knocked her up"

"Charge" only has a few missteps, most notably the clichéd "Rap Star" and corny "Writer's Block," and the hits keep coming through the end of the 50-minute running time. Doc Felix comes through with a menacing beat on "Berocca," and the heartfelt "Daddy's Girl," a dedication to his young daughter, is a highlight both musically and lyrically. The closer "Like the Clouds" is appropriately ethereal and finds Eloquor at his thoughtful best.

"Charge" is a perfect title for Eloquor's sophomore effort, an inspiring record that feels authentic given Eloquor's day job as a teacher of disadvantaged young adults. The juxtaposition of Eloquor's rugged style and the clean music makes for numerous highlights, and "Charge" is a consistently memorable, quality LP.