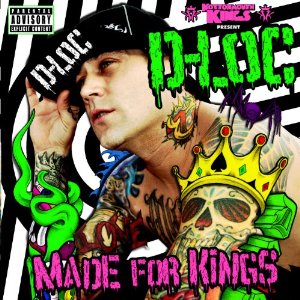 I feel like I'm reviewing one Kottonmouth Kings related album every 4-6 weeks. At the end of May I checked out the new group album "Long Live the Kings." In mid-July I covered Johnny Richter's "Laughing." Now the pace is picking up as D-Loc's solo album "Made For Kings" is on my desk just three weeks later. It seems clear to me this is supposed to be the summer of the Kings - perhaps they should be marketing the albums that way. If you're a long time fan of the group going back to the 1990's this is fantastic news. If you're a casual fan who respects their "Rip-Hop" hustle, it's good to see them on the grind. If you're a critic who is at times a little ambivalent about their output, you have to kick the feeling that you're overwhelmed with their material to the good and try to be impartial about yet another album on your desk.

Let's be perfectly fair then about Dustin 'D-Loc' Miller's first solo album. On most Kottonmouth Kings albums D-Loc's lyrical contributions blend into the mix, or put another way he's not the group's most quotable member. As a writer he's basically competent - he can rhyme one line with the next and not embarrass himself - but even among a rap group that's never had to impress anyone but PBR drinking, weed smoking frat boys he can't break out of the pack. The flipside is that D-Loc is a solid member of the band who can always be counted on as the glue to hold a track together. His almost purposefully dry, monotone delivery fills a spot in every track so his fellow rip-hoppas don't have to pen 4-8 more bars each. He's not going to show them up, and he's not going to let them down, he's just consistent. That's where the trouble begins on "Made For Kings." When he has the entire Kottonmouth Kings crew surrounding his verses, you don't notice how bland his raps can be. As a soloist it's almost impossible to ignore it, especially on a track with a generic cliched concept like "Feels So Good":

"Let me break this bread so I can pop my collar
Put this shit down, y'all can me your poppa
I slide through, let my motherfuckin nuts hang
Give a fuck like an old school gang bang
Double Dash one time for your mind yo
Double Dash always got the hydro
With the Captain & Coke to match
You don't like me to front, you can see me in the back, whoa!"

What's more bothersome about D-Loc's rap is there seems to be a lack of thought about what message he's conveying. It sounds like Miller wants to show his swagger, but he does a poor job of conveying his wealth. It sounds like Miller wants to show he's a badass, but comparing himself to rape sex is borderline nauseating. It sounds like he wants to appeal to potheads, but anybody with a medical marijuana card in California has "got the hydro" too. This is exactly why D-Loc's verses don't tend to stick out on Kottonmouth Kings albums, and it's nearly criminal to consider they're now being put front and center like they're worth showcasing. While as a critic it often concerns me when there are so many guest rappers on an album the billed artist is no longer the star of his CD, on "Made For Kings" I'm begging for relief. Pairing D-Loc with Kurupt on "Shake Them" dramatically improves the CD even as it points out how little star power he has by comparison. "Playa" features former Kings rapper Saint Dog and his rap sounds like the whitest Bay Area ballin' you've ever heard - and again stands out like a sore thumb next to the unemotional Miller. The only other guest appearance is Judge D on "Take a Ride" which means you're getting way too much unfiltered D-Loc.

Some Kottonmouth Kings releases can skate on their adrenaline fueled approach to making rap music, which at times borders on being hard rock or heavy metal, stylistically having more in common with Slipknot and Linkin Park than fellow West coast hip-hop ballers. Unfortunately this self-produced album has D-Loc trying to show his love of rap and not rip-hop. It's hard to even describe just how ill-advised his cover of Special Ed's "I Got it Made" is. If you love the original then listening to this one might drive you into an uncontrollable rage. D, leave the hip-hop cover songs to Snoop Dogg. Thankfully "Gangsta Bitch" is not a cover of Apache, and it's one of a scant few songs on the album that has any real Kings attitude. "In the Club" also fits the bill. The majority of the album feels like D-Loc is going through the motions - everybody else in the crew is doing something so I should put out a solo album too. No Mr. Miller - no you shouldn't. The two or three worthwhile songs should have been saved as bonus tracks for a Kings album. Even at only 46 minutes, this CD just feels way too long.