Quanstar :: The Underdog :: Bandcamp
as reviewed by Steve 'Flash' Juon 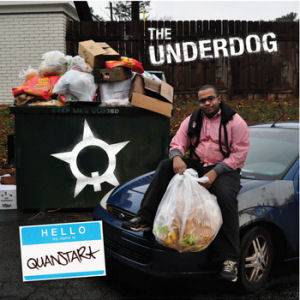 "The only way to get it is to go out and earn it
There's no turnin back cause the bridges are burnin
I used to want a manager but figured they useless
I fucked with a label but don't like how they do shit
The videos on cable fuckin cost too much
And mainstream radio is whack as fuck
Now cats back trackin that path, we up
See the folks that ignored me now ask whassup
Now they couldn't try to sign a nigga fast enough
At the start, same cats that laughed at us"

Vowing that he's "the greatest fucking emcee to never be signed," Quanstar is back with his fourth volume of unsigned music. Regrettably I missed the first three and only recently got introduced to his music, but the self-titled single off his new "Underdog" album drifted into my inbox and impressed me enough to get a spin on my weekly podcast. It's amazing how many talented rappers are putting their albums straight out to the public, for free or for a small donation fee, and just bypassing the conventional "get a deal, record an album and get it into stores nationwide" model altogether - but I digress. Suffice it to say Quan's rap on the above intro and on that single suggest a polished rapper that 10-15 years ago would have been hungrily snapped up by an indie imprint until bid on by a major label. Q found an ideal analogy for his career in the NFL:

"I'm the underdog y'all, Kurt Warner of rap
Payroll ain't even close to the salary cap!
Maybe I'm wantin too much, you shouldn't bother me
Do it my way, still make a million dollars
While most cats that are noted for playin this label game
After everybody's cut, our bank accounts look the same
So niggaz get fame, and people call they name in the mall
That's just more folks to know how you fall
See if I'MA go down I'ma GO givin my all
Rockin a couple hundred people yellin YES YES Y'ALL"

The rapper who represents A-T-L is very humble and prone to crack self-effacing jokes about his music at all times, noting on "Mr. Blue Collar" that he'll be standing in the bread line if you're not buying his rhymes. The funny thing is that he doesn't really need to be humble when you look at his bio: he's been putting out music since 2003, has toured with Black Sheep, been featured on the Vans Warped Tour and even written for TV. Perhaps he could be accused of exaggeration when he describes himself as "the hardest working man in hip-hop to never be signed," but if the resume is everything it seems to be he's definitely not a lazy cat. In fact Quan is hustling so hard that he linked up with Akil the MC (formerly of Jurassic 5) to do music, and one of those songs wound up on this album: "Heart it All Before."

Akil: "Somebody told me hell with this rap shit, nigga let the mac spit
Chop it up and package it, flip it like a mattress
You'll never make a platinum hit, won't make a classic
You ain't Jeezy, you need to quit and sell cannabis
Bang the hood, really you ain't that good
If you was, then why ain't you signed with Suge?
You seem them other niggaz quit, they wasn't feelin yo' shit
Broke and went solo now who you fuckin with?
Those you thought was true or really close to you
I seen interviews and they ain't even mention you dude
The homies wouldn't do you like that
Even though we might scrap and pull straps, niggaz still got'cha back"

Quan: "Get my kids put my hands on they ears
Trained them they're not to listen to the shit that they hear
Because if you really want it, you can get it if you wish
Just step to the plate and swing at the pitch
And even if you miss man swing again
One day you gonna hit it and begin to win
Somebody told me yo Quan, how dare you
Give kids hopes of something that's there too
I told 'em that it's simple man, I gotta give 'em good
Let 'em know that they more than the Boyz N the Hood
Not that bein a boy in the hood is bad
But when a boy's still trapped in the hood it's sad
And rather than be in the projects cookin coke like a chemist
Get a job with Coke, work in the project as a chemist"

I know you're skeptical about yet another new rapper claiming to be great but unsigned because there's anywhere from tens of thousands to millions who all think they're the shit, don't have a deal and giving away their free album or mixtape online. If that's a given, then consider how much BETTER Quanstar has to be than most of them to have actually broken through the pack. Even his guest stars stand out amongst most albums you'll download this year - Ghani Gautama makes a funny cameo on "Caffeine Hustlaz" as both men rap about pushing latte to make their pay. "Bank" featuring Juicy the Emissary has a loping clip clop beat backdrop that sets up JTE perfectly, as he sounds like a country rap version of Eminem. "It's funny right? But I'm hardly laughing." No offense Juicy, you're nice. Nato Caliph also rocks on "Revolution."

As noted earlier though, Quan believes in the swing, miss and swing again philosophy. While "Summertime" in Atlanta is undoubtedly as nice as described in rhymes, it's not impressive musically and suffers by comparison to the first hip-hop classic to rock that title. "American Dreams" is another song that needed more bump in the lab. "Relax" plays off a classic track by Tribe but it's over too early at only 1:52. I mean no disrespect to his seeds either but I don't need two skits mixed into the album of him goofing around or play-rapping along to old Vanilla Ice hits with daddy. It's worthwhile to cut Quan some slack for the tracks that don't work though, because the ones that do work more than make up for it. He's working hard to impress you, and giving you the chance to preview his album for free and then name your own price to download it. Based on what I'm hearing anything between $7-$15 would be fair, especially given it's arguably twice as good as some rappers who ARE signed and totally suck. Quan's got bill paying skills. His time in the bread line will be short.