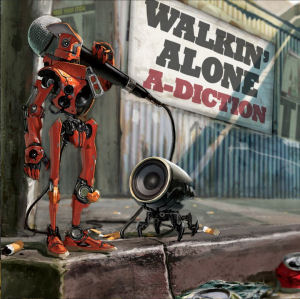 The Melbourne duo known as A-Diction is made up of emcees Breach and Boltz. The two have a few releases under their belts, including 2005's "To Be Announced" EP and last year's "The Three Year Itch" and "In Good Company" mixtapes, but "Walkin' Alone" serves as the duo's debut album. In the works for quite some time, A-Diction searched high and low for musical collaborators for this effort. Production comes from the likes of Jase, Lewis One, M-Phazes, Mules and Whisper. "Walkin' Alone" also features appearances from Haunts, G-Force, Scott Burns, Billy Bunks, Raven, Fraksha and the aforementioned Whisper. Vida Sunshyne and Bekah also lend their vocal talents to the recording. Throw in some cuts from DJ Mathmatics. Doc Felix and DJ Juice and we're ready to go.

One of the things that jumps out from the beginning is the album's production. The "Intro" track starts off on some really smooth "we got something to show you" tip, but then rolls into the head nod-inducing title track. The cuts by DJ Juice help to accentuate the track as the duo asserts that if you don't walk them, then they'll be "Walkin' Alone." The album moves along, bouncing from topic to topic including picking up the women on "Wingman" to having a little bit of fun and not taking everything so seriously on "Ladies & Gentlemen" to the ups and downs of friendship on "Just You." The difference between hip-hop in Melbourne and in the States is explored on the Mules-produced "What We Do":

"First comes the respect, but that ain't enough
Respect don't pay the bills at the end of the month
So, time to drop more
Here comes the sophomore
Out for the cash
Drop a club hit for the ladies and be out in a flash
Do what you can
Forget everyone else man
It's just you in the end
Floss that jewelry, degrade those women
Go make your fans proud of the way that you're livin'
Yeah, yeah...we watched you do it, blow up and hit the big time
Now you dumb it down, show up and spit a shit rhyme
Shut the fuck up, I'm sick and tired of hearing it
Sincerely what I'm fearing is
[...]
I guess the difference between us and the States
Is that it ain't big down here, so we suss it and wait
True to the art form
Never go from making them hits to taking a piss, we refine our craft more"

M-Phazes produces the dark posse cut, "Capitol Vices," which features Fraksha, Billy Bunks, Scott Burns, Whisper & Raven. To be honest, coming into the review, this was the sound I was expecting to hear throughout the album, but I was pleasantly surprised. One of the album's most poignant songs is "Unbalanced," which touches on the disparity between the haves and have-nots in our society. The punchlines are put to the side in favor of unrelenting vivid imagery that puts the listener right in the center of it all:

"I went to see the pyramids of Giza
Didn't know we'd meet so many people in need (ah)
In a country relying on tourism
Bribery and corruption have clouded a pure vision
I saw pain in the eyes of a mother
The fact that this exists is the real ancient wonder
The poor will beg, the scene unsightly
The rich are fed, they can't decide, see
The locals, starving, have sold their wares
I hope you care, pose for the camera there, yeah
And while young kids are blown to bits
Celebrities get paid for baby pics, shit
If God exists, I'm sure he's pissed
He made us the world, and we gave him this"

The album starts to wind down with "Lost For Words" and closes out with "Hold On." The former is about embracing those moments that render us speechless, while the latter is all about doing what it takes to move forward with life and welcoming "the fear of the unknown, the thrill of the risk and the satisfaction of achievement." As I stated earlier, I really thought this album would have a lot more grime to it, but again, the lack of it was refreshing. I also enjoyed the album's production. The various samples made for a rather interesting listen. At times I would almost forget I was listening to an album from the other side of the world, until I heard their accents. Breach and Boltz manage to hold their own over the course of this album, and for an album that took four years to make, the material doesn't sound dated at all. In the end, something tells me that this duo won't be "Walkin' Alone" for too much longer.