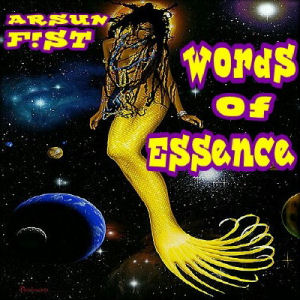 "{Oh the music} keeps me calm in the struggle
Live by my hustle, if not I'm in trouble
Writing on instinct, will think in an instant
It's all vivid, the art is my business
{Something} that I had to say
If you're too sensitive, then get out of my way
Pay homage to the vets while I stake my claim
And to the stars in the sky, y'all carry my flame
Rhymes, beats, life, love"

Those aren't just Arsun F!st's "Words of Essence," they are the words he lives by on "InNer BlisS." The capitalization is intentional on Arsun's part, though I'm not really sure why. It hardly matters the reason though as I'm entranced by his devotion when he says "{oh the music} takes care of me, talk to it like it's therapy." Actually he doesn't say it all - the parts in brackets are uncredited samples from a smooth R&B record. Why uncredited? Because Arsun and his label Domination Recordings are giving away this short EP for free on Bandcamp.

This isn't unprecedented for Arsun F!st - he previously gave away his "Mood Points EP" for free through Domination as well, and in the process of doing so caught my ear for a review. Then as now I'm impressed by Arsun's flow - this is a brother who should definitely be getting paid for his work instead of giving it out for gratis. He's got highly polished breath control, and unlike his vow that he's "writing on instinct" each bar of his raps seems carefully crafted not just to rhyme but to make a point worth listening to. "Dream Chaser" melds a smooth piano, some old school R&B club crooning and the wisdom of someone many years his elder, as he vows to "keep things in balance, take care of fam and rise to the challenge." His vocal tone is a mixture of Talib Kweli and Malik B, and the practical nature of his rap reflects similar influences: "You only live in it once, stop being a punk/and moti-vate yourself to get out of the slump."

With only four tracks on "Words of Essence EP" there's very little to blast, but there's even less worth blasting Arsun F!st for. Over longer releases he might have enough different producers to do him wrong, but F.M.T. certainly doesn't on "Dirty Faced Angel." When he says "consider it signed and sealed because I'm the truth revealed" I can only agree, and the Little Brother-esque smoothness of "Touch (Cell Phone Convo)" is a winner too. I keep waiting for Arsun F!st to either drop a full length album (which I'll gladly pay for) or finally miss the mark on a free EP and release something that I don't care for. Until either happens, don't make the mistake of not downloading this joint.