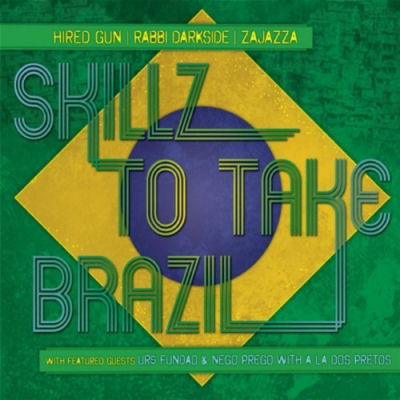 "Skillz to Take Brazil" is a collaborative effort from a group of very diverse people. Hired Gun and Rabbi Darkside are emcee/educators hailing from Brooklyn and handle most of the emceeing duties on the album. Zajazza is a French DJ/Producer who handles the production. The trio met up in Brazil for what originally was meant to be a tour. That tour led to late night recording sessions and collaborations with Brazilian emcees. Those recording sessions are collected here, a project born out of love for and exploration of the Brazilian culture. The album presents the age old question – Are other people's vacations really that interesting?

"Skillz To Take Brazil" is filled with jazzy, head-nodding beats thanks to Zajazza. "Visas" is driven by a simple bass line and choppy piano sample. The combination isn't complex, but the result is dope. "Little City" features some majestic horns blowing over slow bass line and makes for a dope international anthem. "Rap Acelerado" contains the perfect interplay between fast bass line and a frantic piano sample. "Somos Assim" features a great series of guitar riffs and a hook that screams soul and emotion, even if it is in Portuguese. Zajazza has a knack for making dope sample based beats. When he tries to play the music himself, the results aren't as good. "Very Good" is a mess of a track with simple synths colliding over the beat with ill effect. Thankfully, Zajazza mainly sticks to sampling on the album.

As emcees, Hired Gun and Rabbi Darkside deliver effective, if unremarkable, verses. The subject tends to be repetitive with the trip to Brazil and love for hip-hop being the main focus. On "Very Good" the emceeing overshadows the beat with Hired Gun and Rabbi Darkside trading verses about trying to get into a club. "Little City" features all the emcees representing their respective home towns, and even if I can't understand them, the Brazilian emcees represent well. "Rap Acelerado" might be my favorite track on the album as the emcees adapt a fast paced flow and just try to flex their skills over a dope beat. Scattered throughout the album are "Tour Blogs" which number from Chapter 1 to Chapter 3. While the entire album tends to return to their Brazilian adventure as the focal point, the Tour Blogs serve as literal play by plays of their trip and tie everything together neatly.

In this case, the international travels of Hired Gun, Rabbi Darkside, and Zajazza are clearly interesting, but their general appeal is still questionable. Independently, I'd say all three are skilled at their respective art. There's no denying Zajazza's melodic and hypnotizing beats. Hired Gun and Rabbi Darkside deftly bounce over the music with tongue twisting rhymes and their fair share of dope lines. All the Brazilian emcees shout "hungry" in their delivery and flow. That said, "Skillz To Take Brazil" still holds limited general appeal. The heavy Brazilian influence alienates those who have no clue what is being said. Even with my Spanish background allowing me to extract some semblance of meaning from the Portuguese rhymes I still came away with little motivation to spin those rhymes more than once. The album is good, the rhymes are good, and the experience they reflect is great, but as a commercial product it lacks appeal. Those involved in the project or those who've been to Brazil will likely draw much more replay value out of the album, but for the rest of us a few spins should suffice.