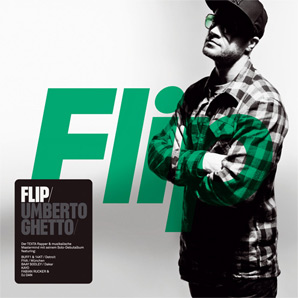 As we continue our completely random coverage of European producers, we run into Austria's Flip, who just so happens to have a new record out. As a member of Linz-based crew Texta he's been a fixture in the country's hip-hop scene since the mid-'90s. They released one live and five studio albums together and have now reached a stage where band members can give in to the urge to express themselves on the solo tip. Unlike the previously covered Glam and Sepalot, Flip always doubled as beatmaker and emcee, two tasks he juggles as well on "Umberto Ghetto." Since he raps in German, the ability to ignore the language barrier is required from the international listener.

Musically, Philipp Kroll is known for finely tuned, grounded tracks. The East Coast roots are obvious, and Flip doesn't hesitate to name-check three of his influences with the interlude "Large Diamond Rock." But like many other European producers, he has developed a style of his own, one that, compared to American trailblazers, focuses on details and attaining a harmonious ensemble (qualities that more recent productions from the aforementioned triumvirate often lack). At one point Flip claims to be Austria's 'Kanye West, Diamond, Madlib, Dre and Jay Dee,' and while those are several pairs of big shoes to fill even on a local level, his beats do exhibit a broad range of moods. Sampling "Ghetto: Misfortune's Wealth" isn't what you would call original in the hip-hop context, but the way he flips (no pun intended) the drum sequence at the very beginning of "U.M.B.E.R.T.O. G.H.E.T.T.O.," he will even have a crate connoisseur's attention.

Lyrically, Flip flexes his creativity in traditional rap fashion on the opening title track, spelling out his alias with alliterative lines, showing his reverence for rap music's roots by mentioning Afrika Bambaataa and even Jamaican DJ godfather U-Roy. He also suggests that we text Melle Mel because "The Message is back."

European hip-hoppers, especially those of a certain age, are expected to be familiar with the genre's history, and Flip is no exception, although the preoccupation seems to have crept up now that he's on his own, Texta's lyrics usually being free of true school rhetoric. But these days we find him pondering a key element of the artform on "Originality" (laced with a Doug E. Fresh quote to match), asking surprisingly compelling questions like whether it's soul or technique that makes a rap classic.

"Originality" shows that Flip is not afraid to ask questions, himself included. He lets doubt take over on "Ratlos" ("At a Loss"), but when self-criticism is paired with a comforting beat, a clueless rapper might just emerge a clever one. Philosophically, there are few popular American role models for the type of MC that Flip is. J-Live, Gift of Gab, or Chali 2na come to mind. Someone who argues with popular opinion just as much as with himself. Someone who analyzes situations and emotions with a clear mind while still striving for artistic expression. Humble and honest but still hip-hop to the bone. Like when he raps in a broad Upper Austrian accent on "Hundat Pro" ("100%") over booming '80s drums and concludes by cutting up Erick Sermon's "Talk with the b-boy slang" from EPMD's "Head Banger."

The scratch parts (all but one done by Flip himself) are particularly noteworthy as they don't reek of throwback but simply reflect his understanding of hip-hop. The majority of the tracks are finished off with scratching, nostalgia nonetheless creeping in with "Back to the Old School," which comes complete with reverberating drums, "Rrrah!" adlibs, Furious 5 interpolations, "Cold Crush" being rhymed with "whole cars," and "F-fresh!" cuts.

Two tracks later Flip is back to the present sharing the mic with two Athletic Mic Leaguers on "Problem," a crunchy, thumping affair opened by Buff1:

"This is hip-hop, or should I call it Flip-Hop?
Live in Austria, we had to make a pitstop
You see how we took Lou Rawls and flipped it
and now we got you movin' like U-Haul equipment
I got a couple stamps on my passport
Athletic Mic League, the champs of this rap sport
Broadcastin' live from the city of Linz
What's happenin' next up, we make you sit in suspense
See, first we dig in crates, then we configurate
Globetrottin', bringin' y'all that music from the Mitten State
Everywhere the tour goes we collectin' Euros
The album Pure sold, now we stackin' pure gold
Call the Federal Bureau, it's gotta be a crime
how we killin' y'all wack cats with beats and rhymes"

While "Problem" is as inviting a beat as any, Flip's productions are usually characterized by their construction becoming part of the song, similarly to vintage Pete Rock. Tracks like "Politrix" or "Ratlos" show emotional progression with their layered structure that pays equal attention to melody and rhythm, to hook and verse.

Five years in the making but reflecting a seventeen-year career in hip-hop and even more time as a fan, "Umberto Ghetto" is an extremely well rounded album that jumps from humorous (the long and hard but ultimately decisive goodbye to a high-maintenance girlfriend, "Unter Hypnose" ("Under Hypnosis")) to honest ("Leere Versprechen" ("Empty Promises")) with ease. Whether he argues with female guest Fiva about staying in clubs too long on "Geh Heim" ("Go Home") (pairing '80s B-Boy Records drums with a polished string/guitar hook), or rocks the rugged rhythm section of "A&O" ("Alpha & Omega") with stinging battle raps, Flip always seems to strike the right note, musically and lyrically. He even makes the best of his matter-of-fact monotone, making it work towards the seasoned appeal of his music. But don't think for a moment that Flip doesn't know how to get busy, as evidenced by the tight beats and flows of "Schwindelfrei" ("Free From Dizziness") and several other tracks.

Flip is a conscious rapper in the very sense of the word. He is aware of the world and his place in it. As a white, European middle class guy who has chosen a hip-hop identity he knows that his background is different from those that invented hip-hop. He tries to reflect that with the Umberto Ghetto alias, which is a play on the name of Italian scholar and author Umberto Eco, who represents the classical European upbringing, combined with the North American ghetto that brought forth hip-hop culture. (To which we might add that the term 'ghetto' itself originated on the Italian peninsula.)

Since the alias can be misleading - a ghetto Umberto Eco? -, Flip is quick to clear up potential misconceptions on "Ghetto?," where he distances himself from the glorification of the ghetto some hip-hop heads are susceptible to, emphasizing his point by inviting Senegalese artist Baay Sooley. But by the same token, he could and should have questioned the other half of the equation - the things that might be wrong with an educated European point of view. But maybe that's too much to ask from an album that already covers many bases.