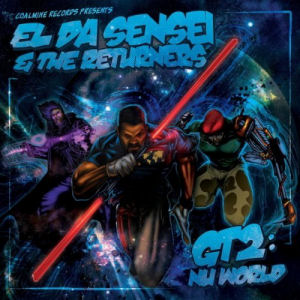 Something I appreciate about El Da Sensei is that he has just about every reason to sound bitter but doesn't. As one-half of Newark duo Artifacts, he released a pair of East Coast standards, 1994's "Between a Rock and a Hard Place" and 1997's "That's Them," two underrated records in their own right, before embarking upon a solo career. Since then he's released a slew of acclaimed albums on his own that, while championed by a select audience, have failed to turn the same heads that Artifacts did. Whether because marketers failed to parlay his relative notoriety into his solo projects or simply because the timing was unfortunate, El hasn't been moving the units he did back in the ‘90s, but he's embraced his underground status as a mainstay on the scene. He doesn't feel the need to remind listeners about his graffiti-rap roots or hearken back to a better day, nor does he demand that new jacks pay dues—instead, he treats his former affiliation as a launching pad from which he's amassed a substantial solo catalog miles deep within the underground.

"GT2: Nu World" is his latest collaboration with Polish production duo the Returners, and it's a banger. The Returners' physicals may be from Europe, but it's clear that their hearts are firmly established in Brooklyn and Newark. Their crisp, heavy production certainly recalls a generation of East Coast classics from yesteryear, but never to the point where it's stale or imitative. The clean, sub-pounding basslines, thundering percussion, and clever use of horns, strings, and keyboards gives El an LP's worth of rugged templates enhanced by frequent Premo-esque vocal scratches of well-known lines by Mobb Deep, M.O.P., Pete Rock, and Biggie. El sounds perfectly at home over the thumping beats and rocks each one accordingly. El's an MC in the purest sense, and his technical precision, lyrical gymnastics, and live energy will have listeners coming back for more. He's got a generally straightforward approach to his rhymes and rarely incorporates conceptual material, so it's fitting that "GT2" has numerous guests, and phenomenal ones at that: Treach, Sean Price, Bekay, Rakaa Iriscience (who has been absolutely killing his guest spots in 2010), John Robinson, Reks, Akrobatik, Tiye Phoenix, M-Phazes, and Mela Machinko. El's at his best when trading rhymes with his lyrically minded East Coast peers, and often it coaxes even more enthusiasm from the veteran MC as he packs complex bars of tongue-twisting syllables and mind-bending rhyme schemes befitting of the verbal athlete.

The collabos certainly provide the most memorable moments, which isn't to take away from El's solo cuts. Sean Price and Bekay both supply quotables on the grimy "Everyday on the Street," while the pulsating horns of "Live Noize" create a perfect backdrop for Akrobatik and El's charismatic energy. Rakaa and El kick "street knowledge" on "Knowledge Be the Key," and the Returners shine with a vicious array of hard-hitting keyboards and cymbals. On the fresh yet gritty "Toxic Words," El, John Robinson, and Reks trade raw rhymes such that it sounds like each is trying to one-up his collaborator. "Right Move" features piano, violins, and muted horn instrumentation as well as Polyrhythm Addicts' Tiye Phoenix.

The Returners concoct a magnificent bell-laden beat on the title track with an ingenious hook pieced together with a half-dozen classic East Coast vocal samples, and the frenetic "Blow Up!" is a showcase for both parties, likening their approach to military measures. The bluesy "2 the Death" is El's manifesto, and M-Phazes' soulful, jazzy remix retains the strong determination as El flexes his deep, commanding delivery and superb technique on his head-spinning verses. "Pain" is a twangy, expansive exercise in social consciousness as El paints stirring portraits of Newark street life, while "Good Time" is a welcome surprise in an old school party track, allowing El to rock the stage like his favorite MCs of yore. The rough closers "They Don't Know," with a killer B.I.G. sample and "Can't You See?" don't let up in the slightest.

A late sleeper of 2010, "GT2: Nu World" is a lively, consistent, well-produced record of no frills East Coast boom bap with minimal skip material. El Da Sensei and his distinguished guests come correct on fifteen tracks that ought to appeal to fans old and new alike. With his cleverly-penned and viciously delivered rhymes, El seems to only be getting better with time, and his chemistry with the impressive Returners has me looking out for "GT3" in the future (although just this week rumors surfaced of an Artifacts reunion?). By looking forward with a heavy, clean sound firmly influenced by the past, El and the Returners have nailed a formula for success in the "Nu World."