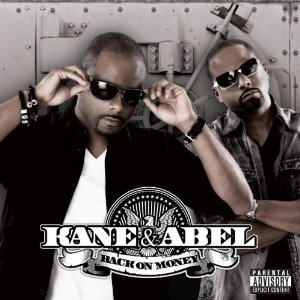 I never messed with anything on No Limit back in the label's heyday. I was turned off by the gaudy Pen & Pixel covers, the synth beats, and the label's tendency to promote a lifestyle rather than make good music. Master P may have been a brilliant businessman, but I wasn't feeling his or his label's musical output. Twin brothers David and Daniel Garcia, aka Kane and Abel, put out two albums on No Limit back in the 1990s, "7 Sins" and "Am I My Brother's Keeper." I haven't heard either, but judging from their latest, "Back on Money," I didn't miss much.

The brothers have been out of the music-making game for about six years. They've been focusing on making street DVDs like "Da Block Party," "Death Toll," and "Father of Lies," the latter starring DMX. They got their start starring in Master P's "I'm Bout It" and "I Got the Hookup." After half a decade away from the game, what's bringing the brothers Garcia back to the mic? Did they miss the outlet rapping provided them? Did they feel like they had something to say? Maybe, assuming they were dying to talk about their love of partying, having sex, and how much money they have.

The press bio accompanying the album is full of biz speak, talking about how they please listeners "across an array of markets," and how their new label, E1, "is a one-stop shop for our high quality content the music, movies and TV shows." The label itself is described as a "leading independent entertainment content enterprise that acquires and exploits world-class film, television, and music properties around the globe."

I understand: Times are hard. No one buys music anymore and it's hard as hell for an artist to make money rapping, since even your biggest fans are just going to illegally download your shit. I get the need for some business sense in hip hop, and the need to diversify and work across markets and across platforms. However, if you treat music like a product, the result is going to be lacking, which is exactly what happens on "Back on Money."

The beats are standard Dirty South, all synths, shouting, and clattering hi-hat. Producers Jon Do, Steve O, B Real (that B Real?), Q Red, Los, and J Buck offer up competent but uninspired beats, the kind of Southern hip hop you've heard a million times before. No doubt it sounds good in the club three drinks in, but it doesn't hold up in the cold light of day. It all sounded like beats I had heard before, and didn't like the first time around.

Lyrically, this is the same old thing that's been done since 2000. The album starts off with "Big Shot," featuring Yung Joc. Over whining synthesizers and a snapping beat, the brothers tread out the same tired clichés about how they have a lot of money and party like big shots. That may have been a believable fantasy in 2005, but in 2010, with the economy in the toilet and the record industry in the cesspool, it's a little hard to stomach.

Bun B drops by on "When I Want To," phoning in his lines on yet another song about how rich the brothers are. Even when they get a decent beat and a B.G. guest spot, like the slowed-down "D Boy Dope," they blow it with an annoying chorus that repeats "I be D boy/I be D boy/I be D boy dope" over and over.

I know there are hip hop heads who can't get enough songs about grinding, p-popping, and declarations of wealth. If you are into Southern club rap, and can appreciate it despite of or because of its many clichés, then "Back on Money" might be your cup of syrup. To me, "Back on Money" sounds dated, half-assed, and not worth my time.