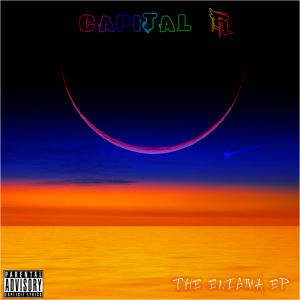 It's always refreshing in today's hip-hop game to hear a rapper who truly knows the history of hip-hop and gives credit to the classic records that influenced him. Capital R falls into this category, as he references and samples artists such as Tupac, Biggie, and the Wu-Tang Clan throughout his debut EP, "The Enigma." What makes Capital R's story particularly intriguing, though, is that he was born and raised in the UK, and is part of an up and coming group of underground British emcees trying to find a niche in the rap game. On "The Enigma," Capital R not only raps but also assists with production, mixing, and sound engineering, working to create a surprisingly deep and well-produced debut EP that is sure to turn some heads.

Many intro tracks on rap albums today are no more than 30 seconds long and generally aren't worth listening to more than once. The opening track on "The Enigma", titled "The Inception," is no typical album intro, though. Over triumphant horns and trumpets and heavy drums laid down by producer Rediculus, DJ 456 scratches in a variety of vocal samples from rap artists which blend together to sound like a long DJ Premier chorus (i.e. the hook from Mos Def's "Mathematics"). With lines such as "rap's just addictive" and "hip-hop's in my veins," it is clear that Capital R has been a hip-hop head since day one.

A lot of Capital R's songs are built around his observations in everyday life and his experiences growing up and coming up in the rap game. The first actual song on the EP, "City Life," features Capital R spitting about the things he sees on a day-to-day basis in the city. Producer ATG captures the feel of urban life with a busy yet beautifully constructed track featuring an upbeat piano and a set of fast orchestral strings, and DJ 456 provides the scratches for a chorus that samples, among other things, lines from Wu-Tang's "C.R.E.A.M." Another easily relatable song is the self-produced "Reminisce the Times," where Capital R reflects on his childhood and the days when he "didn't worry 'bout a thing." The easygoing nature of the strings and piano, combined with Capital R's laid-back delivery, make for an enjoyable walk down memory lane that almost anyone from his generation can relate to.

Of course, "The Enigma" also features several hardcore beats that Capital R and his crew flow on. "Venomous," which once again features cuts from DJ 456, starts off with a Biggie sample – "prepare for this rap killin'" – as the high-pitched strings and sitar-like background guitar lace the track. Female rapper J.A.I., who sounds strangely like a UK version of Missy Elliot, kicks off the song and is followed by Capital R, who calls out those who have doubted him over the years and ends with the line: "So watch me like crows, I keep you on your toes/ Folding on my foes like a stack of fresh clothes." And on the track "You Don't Own Me," Capital R and seven other UK rappers spit about their individuality in the rap game over a menacing piano and a deep bassline.

The last song on "The Enigma", "I Represent (For Hip-Hop)," is fitting end to Capital R's debut because it best captures his undying love for the art of hip-hop. Over a simple drum pattern and a flowing piano loop, he raps about growing up listening to hip-hop, analyzing the rhymes and practicing his diction and flow while dreaming of one day making it big. The last two lines of the song – "Hip-hop forever, 'til death do us part/ These rhymes are inscribed inside of my heart" – are a testament not only to Capital R's appreciation for rap but to his determination and will to succeed as an artist. While it is true that his rhymes occasionally lack the polish and complexity that are necessary to achieve greatness, Capital R's unique delivery blended with old-school beats makes "The Enigma" a very solid debut from an artist who has nowhere to go but up.