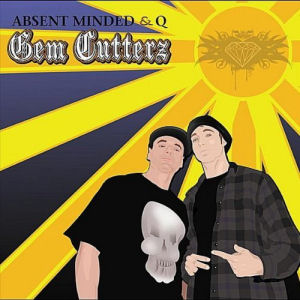 Patrick Taylor first introduced us to Toronto, Canada rap artist Absent Minded back in 2007. PT was generally complimentary of AM's style, noting that the beats had a polished sound and "were definitely not hastily made on a crappy keyboard" and on the mic "he doesn't try to pretend he's a thug, he doesn't floss, and he keeps his boasting limited to his skills on the mic and prowess with the ladies." That's more than enough recommendation for me to check out the follow-up album "Gem Cutterz," and this time around AM has found a tag-team partner named Q. All I know about Q from the one sheet is that he's a competitor in something called the "KOTD Battle League" but one can presume the already promising AM wouldn't link up with someone who would prevent his progression in the music industry. The two split production and lyrical duties throughout on songs like "Doom":

"I break out then over the stars
Snake pouncin I'm holdin the darts, stakeout, who's rollin in cars?
Pray now, not the moment it sparks
When it gasface your way of life's molded in scars"

"One path to walk, several routes to choose
The wise one walk but the youth run through
But the young heads know that the truth is viewed
and they try to read the messages that might spell doom"

The dirty rolling bassline and hard hitting piano keys give the team a sound heavily reminiscent of Swollen Members, and it works. Ivories also play a prominent, dominant and not unwelcome role in "Wisemen Say" featuring iLLvibe, "If You Want It" and "My Only Love" among others. For whatever reason the duo seem the most inspired when they're working over a felt covered hammer striking steel strings. Still there are times when these "Gem Cutterz" find different ways to split their quartz, such as the African drums and airy light backing melody of "Nothing's Changed" featuring the croon of Jordan Croucher. It's not until track twelve that they finally work that gemologist gimmick into a song title or their rhymes with "Drop a Gem On 'Em," which to be fair was first used in name by Mobb Deep but these Cutterz still make it their own. The track reminds me of David Bowie's "Fame":

"I look up when the sun shine down on my mic fits
Then I'm doin shows outside for some hype, it's
tightness to the snare like lightning
Slice through the air, everywhere it's excitement
Gem Cutterz indictment, breakin the rules
Crowd surfin, startin fights in the sesspools
Feel the diamond cut right from the best hues
In the middle of the night with some fresh tools"

It's clear these Canadian spitters and mixers are on the cutting edge in rap, pun definitely intended, but it should not be assumed they've already gotten to the top of the gemstone pile. Some songs like "Birth of a Style" featuring Shauna Z make the most out of a "less is more" musical and lyrical approach, while others like "Ride Low" are too busy, offering so many different layers of sounds and effects that the lyrics start to get lost in the mix. Absent Minded and Q have to strike a careful balance between being creative and TOO creative, because when they do they're hard to follow and just as hard to enjoy. On the whole though "Gem Cutterz" is a well thought out and performed release.