Dagha :: Noise Is the Trigger 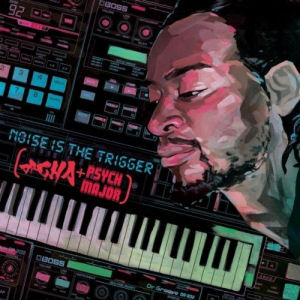 "What we've done is created an atmosphere livable for all rythmatic addicts, a combination of elements meant to generate a new hip-hop world."

This is Boston emcee Dagha's vision for his latest EP, titled "Noise Is the Trigger", which pairs the longtime underground affiliate Dagha with New York producer Psych Major. Fresh off his 2008 album "The Divorce," which focused on his real-life relationship issues, Dagha continues to rap about his everyday experiences and observations on "Noise Is the Trigger". Checking in at only seven tracks, one of which is an interlude, the EP nevertheless offers an intelligent and surprisingly political look at the underground rap game.

""Noise Is the Trigger"" has more than a hint of old-school flavor that resonates throughout the EP, brought on not only by Dagha's gritty voice but also by Psych Major's unique producing style. Psych Major samples from a wide variety of music -- including 90's hip-hop, heavy metal, and even reggae – and uses live instrumentation to create a sound unlike most hip-hop albums in today's day and age. Of course, while the style varies from song to song, the EP as a whole maintains an underground vibe with deep bass lines and simple but effective drums that mesh with Dagha's vocals.

On the first track, "WildFellow," Psych Major samples a line from Inspectah Deck's song "City High" for the hook: "a wild fellow tryin' to keep my mind settled." Over a deep brassy synth and a head-bobbing set of drums, Dagha comes on after the opening chorus and absolutely tears the track apart, delivering arguably his best lyrical performance on the entire EP. Throw in an old-school DJ Premier-esque piano sample at the end of the song, and "WildFellow" sets the bar high for the rest of the album.

The next song, "Stress Mode," also features a Wu-Tang Clan sample in the chorus, this time coming from Raekwon's verse in "Da Mystery of Chessboxin." Brooklyn rapper Smoothe Da Hustler joins Dagha on the track, as does Psych Major, who spits a down to earth verse about the lifestyle of an underground hip-hop producer:

"These trust fund kids got production deals
I got a Fisher-Price sampler and a Reel to Reel
There's mold growin' thick in the dust that it's hid in
Because I can't do music without my wife's permission
I sneak a beat, after the kids go to sleep
But the crackle wakes them up because the headphones are cheap"

While there are two more guest emcees featured on the EP – Lil Dap and Al-Jabra – nobody can touch Dagha's skills on the mic. On the track "5 Seconds to Breathe," as the funky Caribbean tune in the first 20 seconds of the song gives way to heavy drums and a deep bass, he spits this tongue twister: "On the run frequently through frequencies/While critics try to make out idiosyncrasies." And on "The Nittygritt," Dagha comes with his rawest verse yet over a track laced with an eerie set of horns that sounds like it belongs on GZA's "Liquid Swords." In the end, the only song on "Noise Is the Trigger" that seems out of place is the heavy metal influenced "We All Work for the Company," which is the song that features Dagha's vocals the least.

There is no denying Dagha's ability to rip mics, and Psych Major's old-school production style is a near perfect complement for Dagha's flow. While it is hard not to wonder what a full-length release from the duo would have sounded like, "Noise Is the Trigger" is sure to wet any true hip-hop fan's appetite. In a world where pop-rap has seemingly eclipsed all other subgenres in terms of mainstream popularity, it's refreshing to hear a veteran underground emcee and producer bringing back some of the grittiness of hip-hop's golden age.