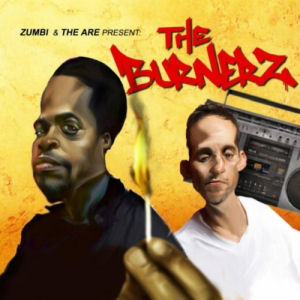 The Burnerz are a collaboration between Zion I MC Zumbi and Trackmasters producer The Are. Zion I are Bay Area underground heroes, renowned for Zumbi's conscious lyrics and producer Amp Live's electronic beats. The Are is a Houston-based producer who has done work for Keisha Cole, Lil Kim, and Lords of the Underground. The two met on tour a few years ago, and the Burnerz is the result.

The biggest difference between the Burnerz and Zion I is obviously the beats. The Are is from the Black Milk school of production, offering fat, hard-hitting beats lightly sprinkled with well-flipped samples. He doesn't break much new ground, but offers up fourteen tracks of solid head-nodders. The electronic music elements that make Zion I's work so interesting are absent, replaced by East Coast (by way of Texas) boom-thwap.

The other difference between the Burnerz and Zion I is the lack of polish. They were going for a raw sound in both the lyrics and production, and it comes through on the tracks. There is an energy and spontaneity here that carries through the entire record. It's an approach that is becoming more and more common in music today; the big budgets for carefully crafted studio albums are disappearing faster than an Antarctic ice shelf, so quick and dirty is the name of the game. In the hands of lesser artists, the results can be sub-mixtape quality, but The Are and Zumbi are pros, and "The Burnerz" is anything but amateurish.

It's also never boring. The disc starts off with the bombastic audio assault of "The World," complete with an opera chorus sample, before going into "Changes," which addresses the hard times we are living through, asking "ready to get more dough, but how low can we go for the guap and the roll?" Zumbi proves himself skilled at spitting conscious rhymes that never feel pedantic or preachy. He draws attention to the havoc that drugs and crimes wreak on the community without sounding like a teacher telling you to stay in school.

One of the best tracks on the album is "Peace," a slow burner about an East Coast transplant who comes to California only to find himself embroiled in a life a crime and eventually shot down. "The street breeds a virus to make hate inside us," rhymes Zumbi. It's based on the life and tragic death of Elray Jones, a 19 year-old shot dead in West Oakland last year. It's a haunting song, and shows that Zumbi has both a deep understanding of what life on the streets is like, as well as the socio-economic situation that leads a young man down that path. Zumbi is not only a skilled rapper, he's a deep thinker, and he manages to translate his thoughts into rhymes in a way that sounds effortless.

Martin Luther and the Grouch show up on "The Edge," a soulful track about keeping it real in hard times, asking "what shall I do? Shit done hit the fan and I'm on the edge/Push done come to shove and I lost my edge."  OneBeLo offers some verses on the futuristic "Off the Wall," and C. Holiday offers backing vocals on "Fly Wit Me." Beyond those three tracks, it's all Zumbi, all the time, and he is up to the task.

Like all good writers, Zumbi is all about show rather than tell, offering by example an alternative to the thugged out gangsta image that is so pervasive in hip hop and the African-American communities in the Bay Area. He does it not by lecturing about how bad the gangsta lifestyle is, but by being better. Hip Hop deserves nothing less. "Burnerz" is fourteen tracks of rock-solid Bay Area underground hip hop, and well worth your time.