Alexipharmic :: Good Side of Bad Vol. 3 ::ÝElephant Memories
as reviewed by Patrick Taylor 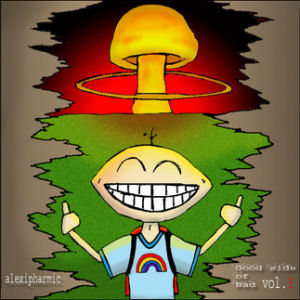 "You want to know why I write?
Well alright
There's too much wrong in the world and I work to make it all right"

One thing you have to say about Alexipharmic: you can't knock his hustle. He recorded this album after volunteering for a month at orphanages in Kenya. He notes "I tried my best to make a product worthy of the tears, smiles, hugs, lessons, and lifelong memories I received from every kid I was blessed to encounter on my adventure." His label, Elephant Memories, donates 50% of musical net profits to Mercy Corps relief efforts in the Congo. Keep in mind that most corporations donate 1% of their profits, and most private individuals donate between 2% and 3%. That's impressive dedication to a cause, and money much better spent that on sex, drugs, and luxury goods, the typical trappings of hip hop success.

You also can't knock some of Alexipharmic's subject matter. He calls out men who beat women, gives shout outs to rappers he respects, reminisces about the 80s, and raps about having a liver tumor. While other rappers sell themselves as lady killers, Alexipharmic positions himself as the nice guy who is the better alternative to the asshole his love interest is with.

You can't knock the beats either. Production is handled by Abstrakt, MGI, DJ Figure, and The Synthesis. They offer up a combination of backpack boom bap with more melodic elements. "Charlie," one of the stronger tracks on the album, has a somber keyboard backed with a rolling snare beat. "Rapunzel" flips a soul sample, and "Cleopatra" flips 80s R&B.

What I can knock is Alexipharmic's delivery and lyrics. He is an earnest dude, but that doesn't always translate into brilliant rapping. He's at his best on the slower songs that end the album, "Ambition," "Charlie," and "Dawn." These songs give shine to his passion and sincerity, and they worked the best for me out of the ten tracks on the album. His earnestness comes off as corny on the uptempo tracks. Case in point, ìG'Day,î which continues the theme of Ice Cube's ìToday Was A Good Day,î but pales in comparison. The lowest point on the album is "Cleopatra," a horndog rant about a hot Starbucks barrista. ÝIt starts off with a rambling intro, and goes downhill from there as Alexipharmic uses "you'll be the cause of my nocturnal cumstains" as a pickup line.

While I wasn't feeling Alexipharmic's delivery, and some of his verses left me cold, I did appreciate his positive, feel-good approach to hip hop. "Good Side of Bad Vol. 3î has solid beats, and the thoughtful lyrics make this one to check out. Fans of Michael Franti will definitely vibe on this, even if I didn't.