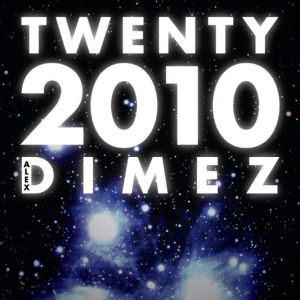 "If you gettin sick and tired of the daily routine
Wipe the whole canvas clean, turn the landscape green
Say green (GREEN) green (GREEN)
Say green, green mean gold for you and your team"

There's an intentional quirk to the quote chosen to open this Alex Dimez' review: Dimez and his label Hand'Solo Records are giving away the "Twenty Dimez" album FOR FREE. It's kind of hard to collect much green for you and your team on a download you don't charge for let alone an album you don't sell in stores. That's actually indicative of the Hand'Solo modus operandi though. For 15 years this independent imprint has charted their own route through the hip-hop landscape, not following the well worn paths to success and prosperity for themselves or their artists. Has it been effective? The fact they're still around makes it hard to argue that being the backpack label even backpackers haven't heard of hasn't hurt much. They obviously keep a tight rein on expenses, rely on word of mouth to increase exposure, and drop seminal compilations that grow in acclaim as the years go by. Until they pull up the stakes and fold up the tent it's hard to argue it's not working.

Toronto rapper Alex Dimez is the next performer to emerge from the Hand'Solo roster. Ironically by giving away "Twenty Dimez" for free they may be giving Dimez the biggest push of anybody in their label's history, allowing the public to sample from an artist they clearly think highly of and have big plans for. The Dimez bio indicates they serviced his second single "All Out" all across North America in 2010 and received a lot of mixtape and college radio exposure. This was followed by Dimez doing opening act show dates with GZA, Pharoahe Monch and Tech N9ne among others. Now some readers may think from reading his press that he's a typical member of the Canadian rap underground (while others may wonder why we didn't feature him during Canada Month in October), but Dimez sounds closer in sound and spirit to East New York on songs like the Jaydapro produced bass and keys banger "My Big Brother":

"At night, prayed for peace, but there's war in my eyes
So I stick with my brother like the four on my side
Any schoolyard beef, he'd be ready to ride
My big brother Archduke, there ain't no other
Different pops, same mom, so we rolled as one
Brothers wouldn't even try cause they knowed he'd come
Back then was straight knuckles, we didn't have any guns
Never had to worry 'bout, gettin stuck for my lunch funds
And even back then, took the time out to puff some
Runnin 'round town like we Biggie and Puff"

Arguably the dedication to your fam or your man who had your back isn't new in hip-hop and hasn't been for ages, but that doesn't make it any less worth doing correctly or showing enough passion and emotion to make it believable. Dimez has regrets that his brother's choices took him away from a path to hip-hop stardom, but vows that he'll always have his back no matter what he does right or wrong. I feel the dedication and feel the flow, with the tempo of a Large Professor and a vocal tone somewhat reminiscent of Sheek Louch. In fact if you closed your eyes and just listened to "All Out" without knowing anything about Dimez, you'd think he was from the D-Block crew:

Jaydapro seems to be Dimez' best collaborator musically on "Twenty Dimez" but Anonymous Twist nearly steals the show with the Marvin Gaye inspired "Stormy," the rare song which would have been better if it were one or two minutes longer. A couple of the tracks here are throwaways which don't really hurt the presentation but don't add much either - the Necro intermission and the Brother Ali outro among others - but for the most part songs like "Green" featuring King Jus showcase the talent Hand'Solo Records is right to believe that Alex Dimez has. It's a good start, and it's a free one, so there's not much to hate. Check out what Dimez and Hand'Solo are working with.