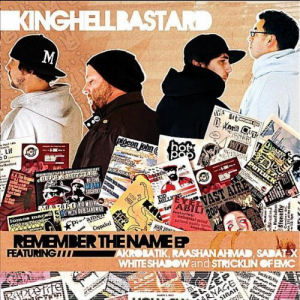 KingHellBastard are a hip hop group that have been part of the Milwaukee underground for a decade.  From their unusual name, you'd think they sounded like some freaky anticon- type noise, but in fact their sound is new old school, the kind of Golden Age-leaning boom bap that has seen a resurgence in recent years.

Their sound is an amalgamation of uptempo conscious rap like Tribe Called Quest and De La Soul rounded out with the harder edge of Showbiz and A.G. and Eric B. and Rakim. Their beats are less stark and their lyrics more positive than what fellow old-school revivalists like Duck Down or DITC are doing. KHB share more in common with positive groups like Ugly Duckling or Jurassic 5, although they do offer up some verbal beatdowns.  MCs Dana Coppafeel, Shemp, and DNA are capable rappers, if not quite at the level of the MCs they emulate. They hold their own with the guest MCs, and their decade in the game shows in their lyrics and delivery.

The first half of the EP includes collaborations with Akrobatik, Raashan Ahmad, Stricklin of EMC, and Sadat-X. Things jump off with the bombastic sound of "Clubber Lang." Producer Reason backs everything but the kitchen sink into the beat: jingle bells, strings, and banging drums. The "more is more" production philosophy reigns throughout all eight songs. They are loud, full of energy, and packed with cuts and scratches. It's 1990 production sensibilities with 2010 technology.

"North Coast" has a grimey beat, with the crew spitting some of their hardest verses. "Ph.D" continues the grimey vibe, riding a sinister organ. "A Tribe Called Bastard" sees the crew revisiting classic A Tribe Called Quest beats, reprising a trick they did on their mixtape of the same name, which combined their rhymes with A Tribe Called Quest's beats. They rep their hometown on "Ma'waukee," and you can almost smell the beer brewing. The EP closes  with a remix of "It's the Crew Again," featuring Sadat X.

If you are looking for music that captures the energy and sound of Golden Age hip hop, KingHellBastard are worth your time. Their dedication and love of hip hop shows in their music, and the result eight tracks of head-nodding North Coast rap.