:: SO Empire
as reviewed by Trenton 'liquid_sky' Ray 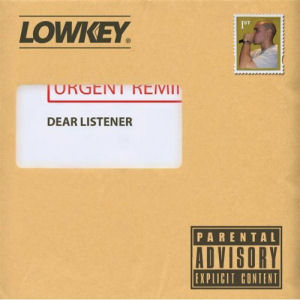 "My whole heart, that's what I give to my fans
A listener's tear is worth more than a mil in my hand
All you talk about is flipping grams and triggers that bang
Me, I consider lyricism, a privilege fam
When it comes to putting words together it's certain that I'm better
Every verse you heard is like a personal letter
So when I die, my fans can say they all knew me
Lowkey, Double P, Yours Truly" - Lowkey, "Dear Listener"

Straight from the top, Lowkey lets it be known that he's not expecting the longest of lives. From being detained in Israel following a pro-Palestine concert to seeing his fair share of public speaking at rallies in his native UK, Lowkey is far from the quiet youngster studying the game. Born to Iraqi and English parents, Kareem Dennis is a melting pot who spits lyrical lava. Lowkey's debut LP dropped harder than a bunker buster on the underground scene, but just like those bombs some tracks hit harder than others.

From touching on the sickening nature of materialism taking the focus away from what he feels are the real stories and instead placing the attention of the people on mindless money chasing and lowbrow entertainment on "Tell Me Why," to what is possibly the albums highlight on the track "Relatives", which sees Lowkey and fellow UK rapper Logic exchange equal tales of the same war, from the newly enlisted British soldier seeking to provide for a growing family to the ravaged local turning to the Mujahadeen, there are real issues that Lowkey speaks of. There are also tracks that seem trivial in comparison to the harsh reality of the aforementioned subject matter. While "Alphabet Assassin" is a great example of flow, hitting A to Zed as they call it in the UK like a babbling brook, it just seems a bit too playful when compared to lines such as:

"Lowkey: I see little kids starvin to death with no food to eat
But an order's and order, we've got to clean the city up
Logic: They see how we suffering and still they don't pity us
They shoot at us every day tomorrow's probably me
Lowkey: We're trying to help these bastards
but it's like they don't want to be free
Logic: Yeah these people don't know what freedom is
[...]
Lowkey: My Sergeant got shot in his face by some dumb young kid
Now I just want to go home that's where my heart is
Logic: My heart is in Basra and never will I part with it
Lowkey: This war's going nowhere, tell me why did we start it
Logic: I'm fighting regardless till I'm resting where Allah is" - Lowkey feat. Logic, "Relatives"

"I believe I was placed on this earth for a specific reason
Numerous close shaves, but still I'm flippi' breathin
I believe all oppressed people should be given freedom
I believe you saw them kids starving
You just didn't feed 'em
I believe in love, I believe in peace, I believe in God
Somehow, some way we're gonna beat the odds
I don't believe in black or white, only wrong or right
I believe there's other life forms up beyond the skies
I believe you can't judge a book by it's cover
We're still brothers, even if we don't look like each other
I believe it's up to you to find the life you'd like to live
I believe God guides my hand when I'm writing this
I've got other purposes besides just rap
I believe I'll probably die before I relax
But if Muhammad Ali won his title back
Then I can change the world when I write a track
Cause I believe" - Lowkey, "I Believe"